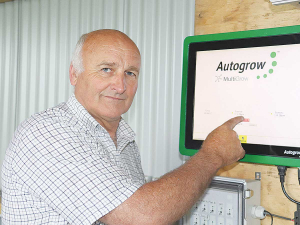 Roger Dalrymple says technology also plays an integral part in the production of the blueberry crop with nutrients and water all controlled by a computer.

The operation is sited on land that was once belong to the agricultural training institution, Flock House, but was bought back from the Government by local iwi, Ngati Apa. Roger told Hort News when the iwi acquired the land they had no expertise in farming and so a joint venture was put together between Atihau Incorporation – a large Maori farming Trust – and Waitatapia Station. It was called Te Hou – that was six and a half years ago.

This coincided with a nationwide programme to encourage Maori to invest in a range of new ventures, with an emphasis on berries. An entity called Miro (Maori for berry) was formed and Waitatapia, Ngati Apa and Atihau all invested in Miro. He says Waitatapia became an active investor and took on the management of the project.

“I went on a trip to Australia on behalf of Te Hou to see how it was done. Australia are world leaders in terms of blueberry production and I was fortunate to visit a property in New South Wales called Mountain Blue Orchards (MBO),” Roger told Hort News.

“Theirs was a fantastic operation. It was not hard to work out the potential for blueberries having seen what they do. They actually do plant breeding and through Miro we were able to acquire two varieties – Eureka and First Blush,” he says.

Roger Dalrymple says they decided that Te Hou would plant two hectares in blueberries, with the capital cost of doing so was about a million dollars. The entire site is completely under cover in tunnel houses and the plants sit on top of plastic matting – there is no sign of soil.

Each blueberry plant is grown in a pot in a special potting mix and small pipes from a central system supply the exact amount of water – together with a recipe of nutrients to each individual plant. He says controlling the environment, albeit at a cost, takes away the risk of crop damage due to climatic conditions.

“The key to this however is having enough good quality water. Initially we were using our irrigation water, but in the end we put down a new bore to get better quality water,” Roger explains. “If you don’t have sufficient, good quality water there will be problems. The blueberries use about 24,000 to 25,000 litre of water per hectare per day when they are in full production.”

Technology also plays an integral part in the production of the blueberry crop with nutrients and water all controlled by a computer.

“The way the system works is that from anywhere in the country or the world, I could log into the system and see what is happening and if need be make changes.”

One of the things that is evident at this operation is the size of blueberries – they are larger than those grown outside. According to Roger Dalrymple, there is a huge market for the blueberries with space in the local market and export opportunities across the Tasman and in Asia. They are seen as a premium product and command a good price.

He says the good news is that the NZ crop comes on stream later than the Australian berries. Even in NZ, blueberries grown in Northland are the first to be harvested followed by the Bay of Plenty and then the Manawatu.

Roger Dalrymple admits he personally likes blueberries and at the moment he can wander around the tunnel houses and help himself as the first commercial crop won’t come off until next year. It’ll be another year before the crop yields are at their best. But he will not see this out. Waitatapia has sold its shareholding in Te Hou and is pulling out of the joint venture, but it is unlikely to be the end of the Dalrymples’ involvement in the blueberry sector.

According to Roger, Waitatapia may at some stage in the future start up its own blueberry operation. He says they have learned a lot in the past three years and if they could get reliable labour and sort out other factors they may be back.

“Life is journey and this has been a fantastic journey and we were lucky that we were big enough to try something new and put diversity into the business,” he says.

Local blueberries sales on the rise

Kiwis ate a record seven million punnets of fresh locally-grown blueberries last season and are expected to eat even more this summer.

Blueberries New Zealand has teamed up with a record breaking athlete, to further pole vault this super fruit’s profile globally.

No blues for these berries

Plenty of thrills on this Blueberry hill

The taste of a single blueberry was enough to launch Harry and Anne Frost into developing a blueberry orchard near Rotorua.