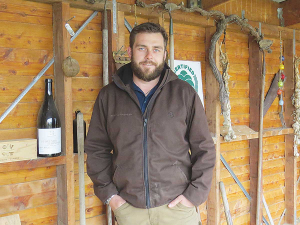 It was only 10 years ago that an 18-year-old Invercargill man headed to Lincoln University to study viticulture and oenology.

Within the past decade, Simon Gourley has become a force within the wine industry and, after taking on peers from the wider horticultural community, is now New Zealand’s Young Horticulturist of the Year.

Gourley, who works for Domaine Thomson Wines (Central Otago), decided on a career in viticulture at age 15. With a bent towards science, he was determined to work outdoors and preferably in Central Otago. Having spent many school holidays with his grandparents on their farm in that area, he could think of nowhere better to work.

“I knew I wanted to come back to Central. I didn’t want to grow stonefruit, so viticulture was a good mix of outdoor practical plus getting to do some real science-based work,” he told Hort News.

Gourley’s first job out of university was with Two Paddocks, initially as a summer practical placement. That evolved into five years with the company before the travel bug took over.

After vintages in Australia he returned to Central, but this time Gourley chose to undertake vintages with Central Otago Wine Company (COWCO). It was a chance for him to better understand the synergy between growing the grapes and making the wine.

“I always thought that a viticulturist needs to know both sides of the industry, and there’s always a real gap between viticulture and winemaking which I wanted to fill.”

Early in 2018, Gourley began working for Domaine Thomson, which gave him the chance to work in an organically run property and broaden his knowledge of the organic and biodynamic regimes.

Taking part in the Young Horticulturist contest has put another string to Gourley’s bow, with many hours of research prior to the competition.

Up against competitors from Landscaping NZ, NZ Flower Growers, NZ Horticulture, NZ Plant Producers and NZ Amenity Horticulture, he not only had to learn about their sectors, but also had to develop an innovative product that would benefit his own industry. The end result was the design of a bud-rubbing tool that would take away the literally backbreaking aspect of removing the buds and shoots from the vine’s trunk.

“It’s a hand-held tool that enables you to stay upright and avoids you getting cuts and scrapes over your knuckles and forearms.  It’s to increase productivity and to eliminate some of the health and safety issues.”

While unable to get a prototype created prior to the competition, Gourley says he will be following through in the next 12 months.

As for the competition itself, he says one of the greatest aspects was learning how other horticultural sectors operate.

“Learning more about what they do on a day to day basis and what their industry entails was a good experience. Everyone had good strengths and weaknesses across all the tasks we did. It was strong competition and I was happy to win.”