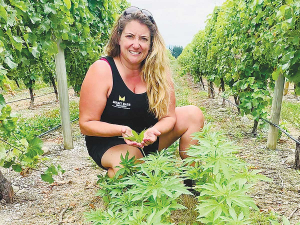 Kirsty Harkness first began looking at hemp as an alternative to seaweed fertilisers.

Cosmetic brand Hark & Zander was founded after a successful trial into the use of industrial hemp as a way of improving soil quality and vineyard biodiversity. The trial was co-funded by the Government’s R&D agency, Callaghan Innovation.

Company co-founder and Marlborough vineyard manager Kirsty Harkness first began looking at hemp as an alternative to seaweed fertilisers. She says its effective microorganisms and estate-made compost rejuvenate the soil without taking nutrients or moisture from the vines or negatively impacting the grapes or wine.

Licenced to grow hemp by the Ministry of Health three years ago, Harkness planted the mid-row cover crop in the vineyards.

Noting how cumulative years of soil compaction and nutrient deficiency can take its toll on the health of any vineyard, she believes it’s important to ensure the life cycle is not just sustainable but also regenerative.

“Having trialled blue borage, red clover, phacelia and buckwheat as cover crops in the vineyard, it wasn’t until I looked at hemp – not only as a way of breathing life back into the soil but also as a potential secondary revenue source – that I really got excited,” Harkness told Hort News.

“In the same way the human body needs to be healthy to be resistant to disease and infection, the soil also responds to this methodology,” she says.

Harkness began to consider how efficacious hemp could be on human skin to help ease her own allergic reaction to some skincare products. The new brand name Hark & Zander was then formed with business partner Gabrielle Zander, a specialist in blending essential oils for skincare.

Harkness says the hemp seed goes through a special filtration process, using the first machine of its kind in NZ to de-hull, remove sediment and produce a cold-pressed, clarified oil with a golden colour.

Harkness, who is on the NZ Hemp Board (NZHIA) and a government hemp committee, says interest in growing hemp has increased significantly in the past three years – increasing tenfold from 200 to 2000ha over that period.

She believes one of the big growth barriers that the hemp product industry must overcome is the inherent confusion with recreational cannabis.

“Hemp is a variety of the Cannabis Sativa plant species, but it is grown for industrial uses and contains negligible amounts of the psychoactive compound THC,” Harkness explains. “For New Zealand to take full advance of the $2 billion export potential of nutraceutical hemp, we need to grow mainstream acceptance of a product which was first used for industrial purposes thousands of years ago.”

With hemp production expected to increase in New Zealand over the coming years, it might not be too long before we see some strange looking machines out in the paddocks.