Foundations for a fine new fibre 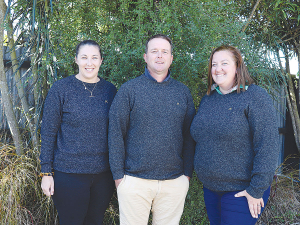 A group of South Island farmers say they are about to expand their range after the successful launch of an apparel business based on blending hemp fibre with merino wool.

Hemprino was formed by three Kiwi farmers who say they are passionate about finding ways to eliminate the environmental impact of fast fashion by using all-natural, heritage fibres that are kind on the environment.

They launched their first product, the "Pioneer Crew" all-gender pullover, in April. Initial sales and interest are said to have been strong.

"We wanted to test the market and see if people were interested and we've had a great response. So, we've gone ahead and got other colours and styles coming soon," co-founder Siobhan O'Malley told Rural News.

Formerly of Mid-Canterbury and now West Coast-based, dairy farmer O'Malley is a former NZ Sharefarmer Of The Year and co-founder of the Meat the Need charity.

The venture grew out of her meeting Mid-Canterbury high country merino farmer Paul Ensor on a Kellogg rural leadership course in 2018. They've since been joined by Harriet Bell, as their marketing specialist.

O'Malley says it had been "quite a journey" to develop their product over the past three years. However, she believes they now have something that is unique in New Zealand if not the world.

"At the very least we really are ahead of the game because we have put in the work and the time to get it right."

At 80% merino and 20% hemp, the fabric combines the attributes of both. It is claimed to be warm and breathable, durable but soft and luxurious (and getting softer with time). It is also being biodegradable at end of life.

While the Hemprino jerseys are fully New Zealand made, with the yarn mixture spun in Wellington and the garments manufactured in Auckland, the hemp fibre used so far has all been sourced from China.

However, they are working with local manufacturers and farmers to build the demand for a hemp fibre industry in New Zealand.

"A core belief is that hemp plants could offer genuine benefits to New Zealand farming systems and soils," she claims.

O'Malley reckons hemp is a crop that does really well in New Zealand.

"You see that with companies like The Brothers Green, who grow hemp products for food and supplements and health products," she says.

"But it's slightly different variety of hemp that's grown for fibre. It's just the manufacturing, that processing piece, that's needed."

Hemprino are looking to the Carrfields subsidiary NZ Natural Fibres to soon come online with apparel-grade hemp fibre from its processing factory at Burnside, Christchurch.

The factory is a former NZ Yarn carpet plant that has been repurposed for hemp fibre processing over the past few years.

The company says it is now implementing 'groundbreaking' new technology for a key step in the process.

Chief executive Colin McKenzie says commissioning a European-sourced decortication machine, which separated fibres from the rest of the plant, was delayed by Covid. It has now been operating since mid-last year.

McKenzie says the next stage is chemical-free degumming, which is removal of lignin and pectin from the raw hemp fibre.