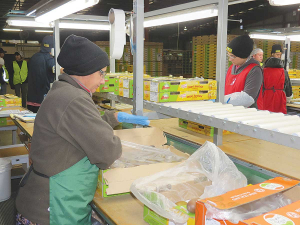 Packhouses have put new systems in place and production has started to rise.

It had them moving very fast, he says, and had similarities to the Psa event.

However, by early last week, the situation had already begun to stabilise.

“All of a sudden what we would deem our normal staff were not available - your backpackers and your RSEs because they couldn’t come in to the country. Your backpackers were shut off – it was tough,” he told Rural News, recalling how it unfolded.

“Then people came to the realisation they had lost job and they started to look.

“I am a lot more optimistic. We still need more staff but they are probably there. But you go back a couple of weeks as we changed from one labour pool to the other I was questioning where are they or what does labour look like.

Trevelyan says when things change rapidly you get this kind of freefall.

“But as soon as everyone in the community understand the new rules, and how we need to operate in this new environment, slowly you getting some order back and you start getting your processes up and going.

“That is what it has been like. Psa was a great founding for an event like this. I have seen or felt that before.”

By early last week, he says they had systems in place and production had started to rise. The two-metre rule had “slaughtered” production but they got smarter and put dividers in to protect staff.

“We have done a lot of work in a week. We are no different, post-harvest are all the same I am sure.

“The initiatives have been put in.

“The site is basically shut down [to outsiders]. We scan everyone on site for temperatures. We have doubled security. We have a paramedic led COVID team walking the floors day and night answering questions, hearing concerns, taking everybody’s temperature.

“We have doubled all the cleaning staff, they are focusing on risk areas, handwashing is huge.

“It is extra time to get people to smoko room, releasing 120 people at two-metre intervals. We had a staff room that used to hold 200, but now it holds 40. We have had to hire big tents to allow people to have a cup of tea, or lunch or dinner.

“You just have to get your head around it, move on and move to the next challenge.”

James Trevelyan says they started early with planning. They have a COVID-19 improvement team which meets every day. Another group on the floor looks after people and listens to concerns.

They have a number of people working at home. The team set up a mental health help video to help them particularly if they feel isolated.

“So, it is just connecting in and changing the norm. Looking at the opportunities in the problems. How do we look at this differently? How do we solve this? That is how we have been chipping away which I doubt is any different to anyone else.”

They are confident they will handle the harvest. A couple of weeks back it looked more tenuous, but the phone has been ringing with people wanting to work.

People can still apply for jobs with the primary sector as an essential industry. They can apply online.

Trevelyan says they will handle the harvest but they need to add more shifts to production.

“We need more staff all right.”

The 2022 harvest of New Zealand kiwifruit is now largely complete with almost all 2,800 growers’ orchards from Kerikeri to Motueka picked for consumers.

Zespri says it has had a record season, with its global fruit sales revenue exceeding $4 billion for the first time.