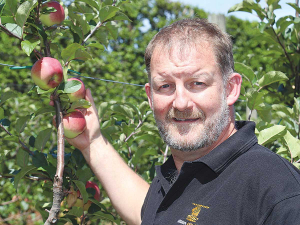 The trip was the brainchild of Hamish Gow, Professor of Agribusiness at Massey Business School and Erin Simpson, Capability Development Manager at NZ Apples and Pears. The 19 person group visited a wide range of leading horticultural companies and businesses in The Netherlands, Belgium and Germany.

Gow says they had run a similar undergraduate version to Europe and Asia, but he and Simpson decided that there was a need for an ‘executive level’ study tour. They got the support from hort industry bosses and Agmardt in late November and pulled the trip together in a matter of just a month or so.

“We took a deep breath and said we can do this. So often in this country there is a lot of talk – this was about doing something,” Gow told Hort News.

He says they called for applicants and got a surprisingly large number. The aim was to bring together a diverse group of emerging leaders, from all parts of the value chain, and people with different roles and responsibilities in the sector. Gow says they ranged from scientists, business managers, orchardists, government officials, as well as technical and communications advisors.

“We had a theme which related to collaborative innovation and capacity building – because this is what the industry needs in NZ.”

The trip was not a freebie by any stretch of the imagination.  Participants had to pay their airfares and travel and a $2000 programme fee. They also had to cover most of their meals while they were on the trip. Gow says they also very worked long days.

“Sixteen hour days were more the norm, than exception, and there no weekends off,” he told Hort News. But this helped bring people together as they discussed and reflected on their respective experiences and insights each day on the bus.

“It was life changing experience for them individually and the daily reflection process ensured that they collectively pulled out the critical insights for the NZ horticultural sector.”

NZ officials, including our ambassador to the Netherlands, Greg Andrews spent two days with the group.

They had a special half-day session in Brussels, where they were briefed on Brexit and progress on NZ’s FTA with the European Union. They also attended a major trade fair in Berlin – Fruit Logistica – where both Zespri and T&G Global made several major announcements about their future strategies.

Gow says every day the group were exposed to new innovative and exciting horticultural developments and met some of the top thinkers and leaders in Europe. They visited a wide range of research institutes and entities such as the World Horti Centre, near Rotterdam; Wageningen University and Research; and the House of Food in western Flanders.

“They also went to Foodvalley, a world class innovative agrifood establishment – often referred to as the ‘silicon valley’ for food – in the Netherlands.

We also visited the port of Zeebrugge where Zespri is building new facilities.”

Gow says a key learning from visiting the various companies and institutes was the positive level of trust and collaboration between them – even competitors. He says the trust was associated with a very clear sense of purpose that they all had and it was something that NZ could learn from.

“As a senior Unilever employee noted everything should have a purpose – brands, companies, and people,” Gow explained.

The numbers of students taking up agricultural degrees at Massey University is not really increasing, according to Professor Peter Kemp – head of the School of Agriculture and Environment at Massey.