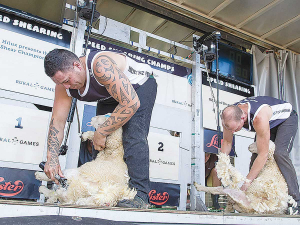 The sheep shearing competition will be a crowd favourite.

These are run by a trust headed by Margaret Kouvelis and also includes a number of leading farmers and business people in the region. The event is designed to create an agricultural week in the region and the focus of the games is to draw in city and townsfolk.

Kouvelis says the games highlight the skills that rural people had and still have to build our nation. Such things as shearing, fencing and coal shovelling – basic jobs that have now become competitive sports.

“It’s a way of celebrating our rural sports men and women in the same way as we celebrate other sports people,” she told Rural News.

“One of the first trustees was Sir Brian Lochore who recognised the tremendous work that the shearers and fencers do and saw the importance of celebrating their efforts.”

Originally the rural sports were held in Queenstown, but the trust managed to get them to the Manawatu region where Kouvelis says they are an iconic fit given the role that agriculture plays in the local economy.

The sports are held in the famous square of Palmerston North city, which Kouvelis claims is an idyllic place and an excellent venue and meeting place for town and country.

In the past, some have come from overseas, but not this year due to Covid-19. The games are free to the public and the cost of staging them is covered by sponsorship of about $1 million.

The main events take place on the Saturday and Sunday, but this year Kouvelis says they have some special activities on the Friday.

“This year, on the Friday, we are introducing the agri futures event for years 12 and 13 students from all high schools in the lower half of the North Island,” she adds.

“The idea is for them to come and find out about the rural agricultural sector and about jobs within the sector. They’ll be able to see the various sports, but also Beef+Lamb NZ and DairyNZ will be there promoting careers in agriculture.”

In the afternoon, there will be a chance for the various secondary schools to test their skills against each other with the clash of the colleges.

On Saturday and Sunday, the rural games begin in earnest and will be a chance for young and old to walk around and see the various activities or to sit in comfort and watch the games on large television screens which are strategically placed around the square.

Kouvelis says people often say they are coming for an hour or two but get caught up in the activities and end up staying for the day.

The rural sports and field day organisers work closely together to promote each other’s events.

“It’s all part of celebrating and showcasing agriculture in the lower North Island,” she says.

More in this category: « From a local show to major national event 'Prioritise Covid-19 vaccinations for meat industry workers' »
back to top