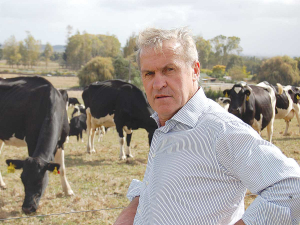 Carter took up his directorship at the co-operative’s annual meeting last month, replacing former chairman Alister Body who stepped down after nine years on the board.

Carter, one of National’s longest serving MPs, retired at the last general elections after serving as a parliamentarian for 26 years and in a number of National governments as a cabinet minister, including Agriculture Minister and Speaker of the House.

He says joining the Ruralco Board is a chance to offer his experience to his first passion—New Zealand agriculture.

“Ruralco has a unique history.  I believe with good governance, good management, and a dedicated staff, it has the potential to deliver even greater benefits to its shareholders,” he says. Ruralco, a farmer cooperative owned by Ashburton Trading Society (ATS), made a gross profit of $1.2 million from a group turnover of $241m last financial year.

For the third year in a row, the co-op paid its owners a bonus rebate. This year farmer owners received $250,000.

But she says the co-op attracted 68 new shareholders last year and increased its market share.

“Crisis does not change who you are – crisis reveals who you are.  Covid-19 revealed a lot about us this year. We are agile, innovative, and willing to rise to the challenge,” said Chan.

She says Ruralco recognises that while the agricultural sectors are currently well placed despite the uncertainty created in the wake of Covid-19, the need to work collaboratively will remain at the forefront of all it does.

OPINION: Your old mate's editor was contacted by Ashburton-based farmer co-op Ruralco in relation to this old mutt's recent column about the difficulty in signing up to the organisation.

Trailblazer gets gong for services to dairy

Canterbury farmer and agribusiness leader Jessie Chan says it feels surreal to have been awarded the New Zealand Order of Merit.