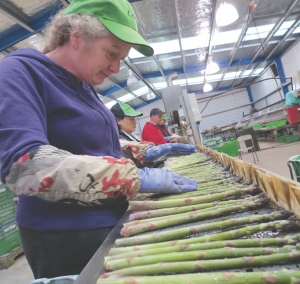 THIRTY FIVE years ago Geoff Lewis left his parent’s small dairy farm to seek his fortune in the sheep and cattle industry.

Today Lewis has added a dairy farm to his business, but asparagus growing has propelled him to prominence as a highly regarded grower using technology for maximum profit.

“When Liz and I got married, I went and managed a coastal sheep and beef farm and forestry block north of Foxton. My employer there was keen to diversify. In the late 1970’s the catchcry was ‘diversify’ and there were goats, deer, kiwifruit – all embryonic.

“MAF had an advisory office supporting diversification by farmers so we investigated and decided perhaps asparagus was a good option for the free-draining sands of the west coast.”

Lewis decided it was a good way to go. “Once I learned the trade, Liz and I thought we would invest in it on our own. We purchased a small property behind Foxton and planted 10ha of asparagus. It was also a time when the canning industry was in its heyday.”

Manawatu had a canning factory, Hawkes Bay had several. Some product was also frozen.

“Eventually our own operation became too big for me to manage with my job so in 1986 I decided to leave my job and become a fulltime asparagus grower,” Lewis told Rural News.

About then his father died, so Geoff and Liz leased the farm off his mother and converted it to asparagus.

“Processed asparagus was seen then as the main market for the crop grown in New Zealand. Today, processing is a minor part of the industry and fresh production is to the fore. We have a fresh packing operation and about 65% of our 300 tonne crop is sold in New Zealand and 35% is exported to Japan.

“That’s changed. It was the other way around, but the Japanese industry has shrunk somewhat and we are now focused more on the domestic market.”

“There is a plant breeder in Canterbury – Dr Peter Falloon – who is one of only six asparagus plant breeders in the world and he is a major supplier of seed to us. We precision drill the seed in our nursery – generally up to a million or so plants and that’s grown there for a year.”

At 10 months of age these plants are dug, sorted and replanted in the final beds, where they will be for about 15 years. No harvest is taken for a further two years; the first harvest is in the third year but only for about 30 days.

“The second year we’ll harvest for about 60 days and the third year for about 90 days.

“After that we run through the normal harvest time which is mid-September to Christmas – about a 100 day harvest.”

Lewis says it’s important not to over-harvest the young plants as they need time to establish. Asparagus is not a gross feeder and doesn’t require large amounts of fertilizer. The chief requirement is free draining soils.

Horowhenua artist Jill Brandon was among many local artists who recently exhibited their works in what could be termed an ‘agricultural space’.