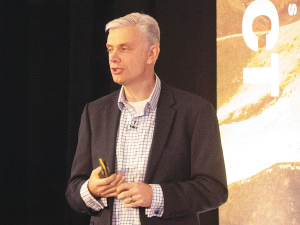 Food and fibre is the most “activist disrupted” sector globally, second only to petroleum, says KPMG’s global head of agribusiness, Ian Proudfoot.

“People desperately want us to grow more food, but how it’s being grown is challenging people and causing them to think clearly about what they expect,” Proudfoot said.

He told the Silver Fern Farms annual farmers’ conference that they could choose to see disruption as either a threat or an opportunity.

The fourth industrial revolution is underway, melding the biological, physical and digital, he said.

“We’re getting this fusion where food that was only possible in Star Wars is suddenly becoming possible in reality.”

Ten years ago about $500 million a year of disruptive capital came into agriculture, mostly from existing big players. Now it is probably $10 billion a year and coming from outside people aiming to transform the future, he said.

For example, the American company Plenty, growing fresh vegetables in a closed vertical farming system, has achieved a seven-fold productivity increase in just 11 months of operation. In contrast, traditional farming took 300 years to achieve this.

“They’ve got a desire to produce food that is enthralling and exciting for people but they’re actually building an algorithm – working out how you match light, heat, water and nutrients to grow food in the most efficient way.”

Proudfoot says New Zealand sells $42 billion of primary products to the world, but it’s worth $250b by the time it reaches checkouts or hotel bills. “So for every dollar we grow and capture in NZ somebody else gets six dollars.”

The challenge is to capture more of that added value, and technology is the answer, he said. “It’s inherent in everything we do these days.”

Proudfoot says the world is moving from a linear value chain with the consumer sitting at the end, to one where the connected consumer sits in the centre and has complete knowledge.

“They understand how everybody connects and they are looking for attributes and products important to them.”

Whether farmer or grower you can take your story to the consumer using technology. “There’s no reason why you can’t put any consumer anywhere in the world in the centre of your farm using virtual reality.”

The value will accrue to the people who bring the value to the table.

“If you in Silver Fern Farms do the right thing you will be rewarded because people will seek out your products and will pay a premium for the actions you take on your farm. It’s a very different model from the one we’ve worked under.”

Proudfoot forsees farmers being asked to examine every part of their business, and anything to reduce the carbon footprint is a step in the right direction.

“The attribute that will be valuable and have a long life – because others will find it incredibly hard to meet – is zero carbon food.

“This journey to zero carbon is actually a journey to securing a significant new attribute claim for our products -- one valuable in international markets. The faster you get there the more time there will be to exploit that benefit.”

Proudfoot says meeting market and consumer expectations is not one-size-fits-all.

Businesses must be agile and understand the specific drivers for individual consumers. For some it may be animal welfare, for millennials it may be innovation.

“The biggest driver for most remains the price point – although some buy low but others won’t buy unless the price is high.”

He says health is a big issue, but NZ is second in the OECD for obesity and has 40% malnourishment, from people either eating too much, too little or the wrong foods.

Proudfoot says if NZ wants to sell “aspirational” food to the world it has to show it coming from a healthy country.

“We’ve all got an obligation to ensure that every child and every adult understands how to eat properly and has access to the food they need to be healthy.”

Meanwhile, on Brexit, Proudfoot believes the big risk for NZ is not the immediate trade pressures of a hard exit. Instead the risk is what may happen in five years when British farmers are no longer being propped up by subsidies.

“They will then have ‘their 80s moment’ and come back far more productive, effective and ready to compete on international markets.”

Farming sector morale on the wane

More evidence - if it was needed - that farming sector confidence is on the wane, burdened down by increasing red tape and workforce shortages.

A mate of the Hound reckons a certain high-profile director of one of the country's big meat co-ops and recent addition to the board of a NZ wool company is living up the mantra of: "Do as I say, not as I do."