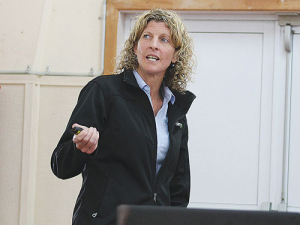 The extra and hidden costs of bringing in feed can often mean increased milk production, but not increased operating profit.

The cost of supplementary feed is 40c/kgMS for every extra tonne of DM/cow.

“A lot of people will say ‘I am paying $330/tonne for my palm kernel so that makes it 30c/kg of dry matter; I am going to get an 80g response to that; a $6 payout means I will get an extra 48c back for that. That is profitable – that is worth doing’.

“But you must be really careful with those calculations.”

The cost of getting that supplement onfarm and feeding it out, including tractor, trailer, labour, fuel, repairs and maintenance on equipment, also needs to be counted.

“With any form of feeding supplement you’ve got associated costs. We also have hidden costs and an increase in both fixed costs and variable costs when you introduce supplements into the system.”

A study done in Ireland using data from 3000 farms looked at what was spent on feed and the total cost of the farm business.

They found a similar result here in New Zealand. Here, for every $1 spent on imported feed, expenses increased by $1.68 in Waikato and $1.53 in Canterbury. The UK measure was 1.62.

“So for every $300 of palm kernel coming onto your farm, that could actually cost your business $450/t.”

Kay says with increased production you need to ask whether you are making money from milk or milk from money?

“Did the extra milk make us money or cost us money to make?”

But if the same farm brought in supplements and didn’t watch costs, their total costs could increase to $725,000 for the same increase in production. Their average cost would be $4.14/kgMS.

“Some people are quite happy with that … they believe they are still making money,” says Kay.

Unless the payout is more than $8/kgMS they lost money making the extra milk, she says.

“We might still have a profitable business but we might have been better off not spending the extra money to make the extra milk. That extra production on our farm has decreased our profitability.

“You can get lost in the averages and you can think that is okay, we are still making money; but you could have made more money if you hadn’t made that extra milk.”

He was doing a lot of production but sacrificing profitability for it, says Kay. He says it has been a good turnaround: he is doing less production than four or five years ago but the money is coming in.

Kay was asked what her advice was for those who had already spent money on a feed pad or wagon. She says the farmer in question now used the feed pad as a stand-off pad and had sold his wagon. You need to ask the questions before spending on capital items.

“But if you do have it you are not going to fix a bad decision by making more and more bad decisions.

“I have talked to a lot of farmers who have that infrastructure there and they don’t use it. I think [the idea is to be] able to make those decisions and being able to have a system where you take supplement out and put it in when you need to.”

- Production is not associated with profit

- Expenses increased by 1.5 times the cost of imported feed.

- Beware of averages: calculate the cost of extra milk on your farm.