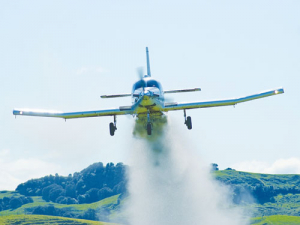 Exploring the uses, benefits and recent developments of fertiliser will be a key feature of the East Coast Farming Expo next April.

Andrew Hogarth, managing director and chief pilot at Farmers Air, believes any information that assists in better productivity and better use of fertiliser spending can only be a good thing.

“Because we have a large geographical area in productive pastoral hill country, to maintain its productivity it needs fertiliser,” he says.

Farmers Air has recently teamed with an American autonomous unmanned vehicle (UAV) development company (PYKA) and they hope to show the capabilities of UAV aircraft at the expo.

“Farmers Air will have variable/constant rate technology installed in one of its aircraft by February next year and it will be expected along with GPS application technology,” Hogarth says.

“The huge rise of the UAV market could bring huge benefits to our industry, hence our involvement with PYKA.”

He also believes there will be major safety implications in the new technology.

“Increased safety -- not having someone operating an aircraft in the low-level environment and the use of electric engines -- will save money and have better environmental effects.”

PFP plans to tell farmers how they can help them make well-informed and educated decisions about fertilizer; one example is the use of prilled fine particle products.

“Most farmers rely on someone walking up their driveway to tell them how to spend their money. Soil test results are not difficult to understand,” he says.

“Every farmer should be able to look at their soil test results along with any fertiliser recommendation and ask, ‘does it make sense?’ ”

He says it’s important to take the time to help farmers make sense of their soil test results.

PFP will be onsite at the expo with sample products, literature and personalised advice.

A farm nutrient advisor at Nutrilink, Melinda Turner, says she will be pleased to attend the expo for the first time.

“My role as an independent nutrient/fertiliser advisor is to guide farmers towards using the most suitable products to meet their farming objectives in a profitable and economically sustainable manner. Fertiliser makes up a large proportion of each farm’s total expenditure.”

Turner says she wants to ensure farmers limit risk and get value for money from their fertiliser spending by looking at the whole picture from the ground up.