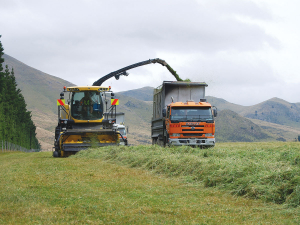 Rural contractors say silage making is being impacted by weather in some parts of the country.

In zone reports at a recent Rural Contractors NZ board meeting, Southland member Daryl Thompson said the constant rain in the deep south was frustrating and challenging.

"It's bloody wet down here and it just won't stop raining," the Invercargill-based contractir said. "Our back teeth are floating."

Thompson explained that grass was not getting away at a time when usually the first silage and baleage jobs were starting, with this impacting on an existing shortage of feed.

Wanaka-based rural contractor Richard Woodhead added there was no spare feed in the Otago region. His area had experienced a wet winter before an early start to spring, which was now being set back by cold winds. He says the Taieri Plains were especially wet - as is the whole South Island - though the moisture would set things up well for when the sun arrived.

"It'll be a good spring when it does turn up," Woodhead explained.

Canterbury's Martin Bruce said the region had also had a wet winter and spring - wih enough rain to be a nuisance for cultivation and drilling. He added that it had also experienced damaging winds in inland areas bringing down trees and cutting power.

Bruce said some silage was now being cut in coastal Canterbury and things were now starting to pick up. He added that some dairy farmers are short of feed with most high-quality supplements in short supply.

However, he believes the wet conditions would set up Canterbury good growth later in the spring, he said.

Graham Greer, who operates out of Marton, says the North Island's west coast had had a pretty mild winter and was looking alright for spring and summer. "The grass is just a bit slow at the moment."

But it was a different story in central Hawke's Bay, which he said while tinged with green had no moisture underneath it. Greer says rural contractors working in that region face a troubling time as drought conditions persisted.

Wairarapa-based Clinton Carroll said the weather there had been rubbish and some good early spring conditions had given way to more rain, which was frustrating at a time when there was no shortage of work.

He says some warm weather was needed for things to dry out and allow contractors to get cracking.

RNZ president Helen Slattery said it'd been a typically wet Waikato winter and a couple of warm spring days had seen a return of cold, wet weather. Some contractors had started doing baleage and maize-planting had started.

Northland's Ross Alexander says his region had been damp and some silage was being attempted but the weather was not yet settled enough.

"We'll wait for October and some warmer weather."