The Loe-down on farm safety 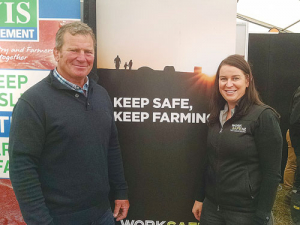 Farmers who resent the attention of WorkSafe inspectors in their workplaces should remember that more people still die on NZ farms each year than are prosecuted for safety breaches.

Emphasising WorkSafe’s carrot rather than stick approach, WorkSafe agriculture sector leader Al McCone points out that a recent spate of prosecutions for not wearing safety helmets on bikes only followed 13 months of “to-ing and fro-ing.”

McCone says that while warranted inspectors have the power to prosecute, there are different levels of enforcement, such as issuing a prohibition notice saying machinery could not be used until a missing guard was replaced, or a less formal notice if the machinery was not due to be used for some time.

He says inspectors will come onto a farm to assess practices such as how machinery is used and maintained, how fuel and other chemicals are stored, and how a farmer is making sure staff are up to scratch.

“What they’re looking for is that thread that sits underneath it, saying ‘I recognise there’s a risk and here’s what I’m doing about it’.”

The message is being voiced by former All Black prop Richard Loe, who attended the recent South Island Agricultural Field Days at Kirwee, in his capacity as WorkSafe’s Safer Farms ambassador.

“We’re trying to engage with as many farmers as we can,” he told Rural News. “We want farmers to invite inspectors to come and consult and see how they’re doing and how to improve.”

Now aged in his late 50s and farming in North Canterbury, the acknowledged All Black hard man says, “when you get to this age, you don’t do ‘hurt’ very well”.

Loe says the worst offenders are aged 55 to 65. “That is the problem, because we have done it for years and got away with it”.

However, Loe applauds the change in attitude toward safety he is now seeing, not just in farming but in all industries, for example, a new car display at a field day.

“You go over to a car and show a bit of interest, and what’s the first thing they tell you about? The safety aspects of it, not how fast you can go from zero to 60.”

WorkSafe says farming is among NZ’s most dangerous occupations: 19 people were killed in 2015 and 18 in 2016; some 20,000 are injured annually. Dairy, sheep and beef farming turn up most of the injuries.

McCone says the danger on farms lies in handling animals, working in and around vehicles, slips, trips and falls, muscular strains, chronic harm such as poisoning and inhaling dust or fertilisers, and stress and fatigue.

“Many people in the sector treat these as ‘just what happens’, rather than saying ‘I could do more to keep myself and the people I work with safe’.”

McCone says WorkSafe wants to unpick this attitude so that, “instead of just doing a job, it’s doing a job in the knowledge there are risks involved”.

The person who runs the farm sets the culture, and the best way for the boss to change the culture is to have everybody engaged in the business, he says.