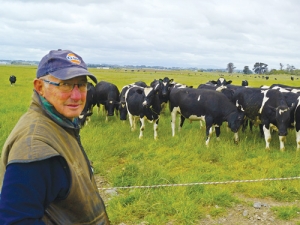 Making the switch from dairying to bull farming several years ago was not the shift all Bruce Kinloch's neighbours would have considered, says Rumensin supplier Elanco.

But it was a change he does not regret today, providing him with more time to enjoy the day-to-day business of farming, have the flexibility to pursue life off the farm and the satisfaction of finishing quality stock.

The 100ha block Kinloch farms, near Tangimoana in Manawatu, was first meant to be a runoff block for his nearby dairy unit.

"But I decided I wanted to keep it after dairying; I liked the size of it, and it means we can run 240 bulls and also put in about 18ha of maize for selling as maize silage."

The numbers include up to 80 weaners sent on to his son's property and growing 20ha of grass for silage.
Kinloch finds that running Friesian bulls is a relatively relaxed business and typically they are easy to handle.

"They are usually used to being handled, and the main thing is to ensure you keep a paddock gap between each mob. If you have the farm set up well, you can run things smoothly. I started out with steers originally and found they were harder to manage."

Some advice from a stock agent about the flexibility and returns from bull farming prompted him to make the move.

His system is grass focussed, taking advantage of strong spring and autumn growth rates to maximise the weight gains from bulls bought in at about 120kgLW in spring.

"Those we bought at about 90-100kg did not do as well as the heavier ones, and we have made that 120kg mark our policy for buying in weaners. You pay a bit more but get a better animal."

Inevitably on the clover, dense pasture bloat is an issue, and prompted Kinloch to try Rumensin capsules on the bulls as they came out of winter into their second spring.

"I work on getting the capsules in them when they are around 300-350kg before they really bulk up around their neck. They can be handled easy enough then, and the capsules go down without any problems; it's a straightforward job."

The first couple of years he only did some of the mobs, and soon noticed those he did not dose were the last to go.

"Last year every bull that did not get a capsule and was blown with bloat would have been 20-30kg lighter than those we treated and did not get bloat."
Last year he bought in a mob of 25 over early winter and concerned about the amount of clover around he administered the capsules.

"We made $600 a head on them, quitting them after three months; they were gone by mid-September, doing exceptionally well."

There is greater flexibility if any bulls bought in autumn are able to be quit before Christmas, freeing up grass supplies as things dry out, and ensuring the spring purchased bulls can still get enough feed to maintain weight
gains.

Opening up the grazing round over spring for the bulls to maximise their pasture intake means using the capsules gives Kinloch peace of mind, not only that weight gains are being maximised, but also that he won't lose any with bloat.

Visually he can always tell the bulls that have the capsules and those that have not.

"Those that don't have them have always taken longer to get away, between a month and five weeks at times."
Despite a challenging start to the growing season with windy, cold conditions, his first load of bulls were killed at 295kgCW in mid-February which was "about where we want to be".

Meantime, he is also enjoying the stronger schedule prices and continuing good prospects for bull beef, running an operation that provides a nice balance between farming and lifestyle.