Capsules help get ewes over line late in pregnancy 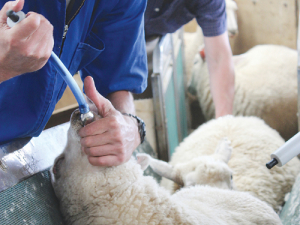 Good prospects for sheepmeat make it worth spending money on flock health.

“These are a viable option for farmers working to capitalise on ewe health and good feed supplies heading into the lambing season,” says Richard Sides, Boehringer Ingelheim technical veterinarian.

“Farmers, veterinarians and researchers have amassed lots of trial and field evidence that shows the long-acting, twin-active Bionic capsules can play a valuable role in ewe health.”

He says the combination of the product’s two key actives abamectin and albendazole into a tablet form represent the single most significant development in the capsule’s technology.

With a focus on using drenches responsibly and delaying the risk of resistance developing, vets are recommending a targeted approach to using Bionic, i.e. administering capsules to the more vulnerable stock classes within a flock.

Sides says one approach may be to target in-lamb hoggets and twin-bearing ewes to boost their immune response to parasite loadings at one of their most stressful times of year.

“The evidence is that they tend to have better condition score, fewer dags and heavier lambs,” he says.

And Sides reckons high country farmers, who have less control over feed supply to pregnant ewes and face more extreme weather, may also opt for the capsules.

Recent trial work in ewes (not selected for condition-score) has shown Bionic treated ewes were 3.2kg heavier on average at weaning and gave an average 3.1kg more lamb liveweight weaned per treated ewe.

The addition of cobalt also maximises the amount of vitamin B12 produced by the ewe, and in turn fed to the lamb via her milk. The selenium dose in the capsule is sufficient to last for up to 250 days.

“A lamb can only receive cobalt from three sources – foetal supply, colostrum and on-going milk supply,” the company explains. “A cobalt treated ewe therefore assures a lamb’s supply is also good through to as late as March.”

Sides says responsible use of Bionic can include identifying “refugia” animals in the flock that do not get treated, helping maintain a reservoir of untreated parasites within the farm population.

He recommends that farmers talk to their vet, compiling a comprehensive, considered worm control programme that covers any resistance risk, and also incorporating the latest in worm control technology.

“Bionic comes with a history of development and innovation, with NZ farmers’ needs in mind, backed with sound science and the support of livestock veterinarians,” Sides adds.