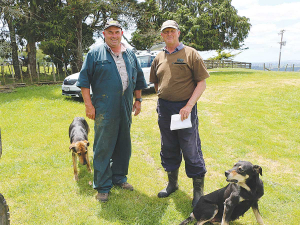 Dairy farmer Darryl Jensen and sheep and beef farmer Rick Powdrell have their biosecurity arrangements under control via the NAIT system.

Better communication between dairy and beef farmers can strengthen animal traceability and disease management, claims a Bay of Plenty farmer.

“Both of us are better off. My set-up with Darryl, where animals move between our farms, reduces the risk of disease spread with farm-to-farm movements localised and fewer,” he said.

“We always know the animal’s history and spend less time recording movements in NAIT, which reduces the chance of errors creeping into the system.”

Jensen’s decision to hold on to his bobby calves and rear them for beef production reflects an increasing trend among dairy farmers. This development is creating more opportunities for dairy and beef farmers to engage and build relationships.

“In the past, when I bought animals from saleyards or private sellers, I’d never really be sure how many times they’d been moved, or sure about their health,” Powdrell said.

“Trading with Darryl and using the same local grazier, I no longer have those concerns. It provides more reassurance on on-farm biosecurity and disease management.”

He also believes it can only strengthen NAIT’s ability to trace animals more accurately and swiftly, when another disease outbreak occurs.

Dairy and beef farmers who intend to rear calves for beef production should be mindful to update the animal production type in the NAIT online system.

From birth, all cattle are assigned a production type and this determines what farmers pay for their TB slaughter levy. It is therefore important farmers regularly check their NAIT accounts to ensure all animals are registered accurately in the online system before moving off-farm.

To ensure they’re paying the correct slaughter levy, farmers can change the animal production type. But they must do the update in the NAIT online system 62 days before the animals go for slaughter.

“If you’re a beef farmer, don’t assume that because you are registered as a drystock farm in the NAIT system you will pay the beef levy at the works,” Powdrell said. “If you haven’t updated the animal production type from dairy to beef, you’ll be charged the dairy levy instead of the beef levy.”

A staunch supporter of animal traceability, Powdrell has been an active NAIT user since the system was introduced seven years ago. He recalls making ‘multiple calls’ over that period to the OSPRI Contact Centre but has no gripe.

“As a farmer these days, we seem to be constantly under the hammer to be compliant with a whole range of things, some of which are unfair. But for me, NAIT is different as there’s clearly a need and a benefit so it is justified.”

Powdrell says those farmers who aren’t convinced even after the M. bovis outbreak, should consider the implications for their business and livelihood of not making animal traceability and disease management a priority.

Two farmers have been fined for failing to register animals under the National Animal Identification and Tracing (NAIT) scheme.