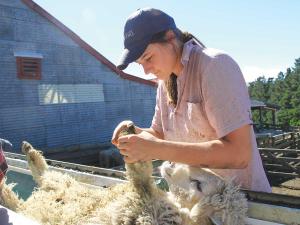 This claim comes on the back off an announcement of a commercialised breeding value for footrot resistance.

The New Zealand Merino Company (NZM) believes this is a massive step forward for ensuring animal health in the New Zealand sheep flock. It says breeding from animals with known resistance will mean sheep will contract the disease less often, have less severe footrot and will heal faster.

NZM project manager Emma Wilding says the breeding value is a figure that allows buyers to compare and choose animals on their likely performance in producing resistant progeny.

Footrot is a contagious bacterial disease, which has historically been an issue in the merino industry but not in cross-breeds.

Wilding says the disease is known to be about 25% inheritable, which means its incidence is about 25% due to genetics. She says this is enough to make improvements in a flock over time by choosing stock with the appropriate breeding value.

“There are about 15 different stud breeders involved in this work at the moment, so they’re actively getting footrot breeding values and using them in their flocks,” Wilding explains. “That flows on to all of the commercial breeders who are purchasing rams off these stud breeders, so they are certainly out there in the industry.”

She says growers who traditionally haven’t farmed fine wool sheep are moving to pick these footrot resistant sheep because they are after the fine wool animal but don’t want to have to worry about the disease.

Wilding told Rural News footrot susceptibility is a multigenic trait and there’s no one gene that can just be switched on or off.

“You can look at some genomics information but we incorporate it with parentage information – who the sire and dam is – and raw data collected from the sheep.”

For traits like wool quality farmers have traditionally improved their flocks simply by inspecting the wool to select their sheep.

“With susceptibility to footrot it’s a bit harder to see,” she explains. “So, that’s why we incorporate the different data that we do, to generate this breeding value.”

Wilding says typical values for a footrot-resistant ram might be minus 0.2 or minus 0.8 on a scale, where zero is the current industry average, and the more negative the better.

NZ Merino chief executive John Brakenridge says it’s not a silver bullet against the disease, but resistant flocks will be less susceptible to production losses, while farmers will save money in treatment costs and chemical inputs.

He says growers have been at the centre of this success, driving wool industry collaboration in ways New Zealand has not seen before.

“These elite fine wool sheep are a pivot point for the industry, opening the door for fine wool flocks to thrive on farms that traditionally have been used for crossbred and strong wool production.”

The commercialisation of the breeding value has come out of the New Zealand Sheep Transformation Project (NZSTX), set up in 2010 as a Primary Growth Partnership programme co-funded by NZM and MPI, with a contribution from Merino Inc.