Heat detection device up for an award 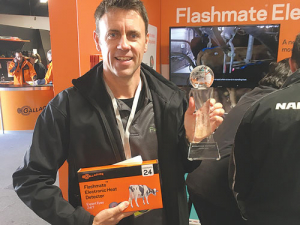 A low-cost device designed to detect when cows are ovulating and ready to be inseminated has earned two Kiwi entrepreneurs a place among the finalists in the 2018 New Zealander of the Year awards.

Fraser Smith and Matt Yallop, of Farmshed Labs, are finalists in the New Zealand Innovator of the Year category for their product FlashMate.

The $10 FlashMate is a small plastic dome, housing touch screen electronics, that accurately detects the activity in a cow that shows she is in heat and ready for insemination. A flashing red light gives the go-ahead.

Smith says this technology helps address a huge challenge faced by dairy farmers -- knowing exactly when a cow is in heat. He says there are big economic factors at stake in heat detection because it’s the single controllable factor that makes the biggest impact on farm profitability.

“Lifting heat detection rates by even a small margin can have a massive impact on the economy,” he says.

“DairyNZ has said a lift in detection rates by 15% would add $300 million to New Zealand’s GDP, so there are huge gains to be made from this.”

Smith says he and Yallop are proud that such an important innovation for the national dairy industry is being recognised by their placing as finalists in the New Zealander of the Year Award contest. The innovator category recognises discoveries, research or innovations that are advancing society.

“It’s great to be recognised for what is a very simple tool, but one that will have a really big impact.”

Smith says every year NZ farmers are trying to spot at least 10 million heats during a six-week period. “They’re looking for behavioural cues and rubbing marks on tail paint that indicate the cow is ready for insemination. This requires a judgement call, which is stressful.

FlashMate removes the guesswork: if it’s flashing then the cow is almost certainly in heat because a clear pattern of heat activity has been established.

“Having your best heat-detecting farmer available for six weeks straight during breeding comes at a real cost on an individual level. We have essentially ‘baked’ that skill and experience into FlashMate so that farmers can leave this critical task to anyone without the fear of getting it wrong and losing out in an economic sense.”

“Mucking in with farmers gave us a full understanding of the challenges they face. We quickly realised that heat detection was their biggest pain point, so developing an accurate heat detector that could retail for under $10 quickly became our target, and now we have a scientifically proven product.”

FlashMate is now distributed nationally by Gallagher, and Smith and Yallop are meeting with dairy and beef researchers around the world who are interested in understanding what the product can do for their industries.

“We are meeting with people at the top of their game internationally, the key influencers in their industries, and they’re excited by the potential of the product,” says Smith.

“Whether it’s farmers, chief executives or research professionals, once they see it’s from NZ we immediately have their attention because we have such a fantastic dairying reputation. Our dairy industry is one of the few competitive industries competing on a global scale that NZers should be proud of.”

FlashMate is now sold in Australia, Ireland, UK, South Africa and South East Asia, and enquiries are coming from all over the world.

Other industry research groups in the UK, Ireland, USA and Japan have also taken an interest in FlashMate. “It’s set to be a busy year for us,” says Smith.

At home, Smith continues to get positive feedback from farmers using the technology.

“We’re beginning to form a loyal following among NZ farmers. Last week I spoke to three farmers using FlashMate for the second year and all three are now in the top 5% of dairy statistics for reproductive performance in NZ, which is fantastic to see.”

Hamish Maclean, who milks 1300 cows in Waikato, says he would normally not have a single day off during breeding.

“Before using FlashMate I wouldn’t have left the farm during breeding.”

Maclean says it’s important for farmers to know they can rely on technology to help them find balance in their lives, and FlashMate has done just that.

Smith says that spoke volumes to him about the technology.

“The fact that it reduces the stress of the breeding season enough to allow farmers to have their days off, spend time with their family and not worry about someone else on the farm making costly mistakes with heat detection is great.”