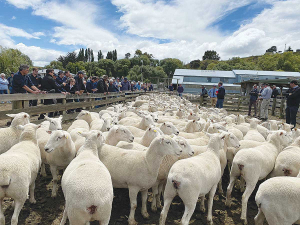 Massey University will hold a Wiltshire field day on 1 June.

Professor Steve Morris says Massey now has a flock of Romney x Wiltshire ewes which have been mated and are due to lamb in September and these will be three quarter Wiltshire/Romneys. He says the field day is designed to show farmers what they are doing and likely get some feedback from them as well.

He says the drop in wool prices has sparked greater interest in these self-shedding sheep.

"There is definitely a lot of farmers who have expressed interest and it's actually your articles in Rural News that has prompted this. It's probably one of the biggest responses we have had to a newspaper article," he says.

Other Massey scientists such as Professor Paul Kenyon, Drs Hugh Blair and Rene Corner-Thomas will speak along with Richard Morrison whose family has a long history in breeding Wiltshires.

Professor Morris says at the field day they hope to have scanning data about the lambs available and their arm is to hold further field days at Riverside in the future.

Has the Wiltshire's time come?

One of the key speakers at a recent Massey University Wiltshire field day was Marton farmer Richard Morrison.