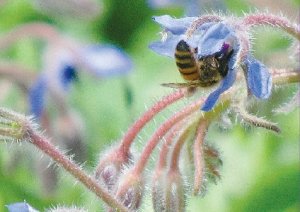 ADD SELENIUM to the list of things bugging honey bees.

Selenium in very low concentrations is necessary for the normal development of insects – and humans – but becomes toxic at only slightly higher concentrations when it replaces sulfur in amino acids.

John Trumble, a professor of entomology, and graduate student Kristen Hladun found bees foraged on flowering mustard and weedy radish plants regardless of selenium concentration, some of which were very high following fertigation with the mineral.

“Nature has not equipped bees to avoid selenium,” Trumble says. “Unless the rates of concentrations of selenium were extremely high in our experiments, the bees did not appear to respond to its presence.”

The researchers also found bees fed selenate in the lab were less responsive to sugar (as sucrose).

“The selenium interfered with their sucrose response,” Hladun says.

“Such bees would be less likely to recruit bees to forage because they wouldn’t be stimulated to communicate information about sucrose availability to the sister bees.”

Trumble says the consequences of bees’ inability to avoid selenium could be substantial, but stresses their research does not show that large losses of honey bees are currently occurring due to selenium, or that there is any relationship with Colony Collapse Disorder (CCD).

Field studies are needed to determine if honey bees collect enough selenium from contaminated plants to cause significant effects on learning, behavior and adult or larval survival.

With USDA funding the researchers are to investigate influence other elements, such as cadmium and lead, which have been found in urban honeybee hives.

OPINION: When Les Hailes was named third form dux at St Kevin's College in Oamaru in 1944 his parents were aghast.

A new generation of organic selenium supplementation will be introduced into New Zealand this year, helping to solve NZ soil's issue of low selenium.

Dealing with the adverse effects of selenium deficiency is a reality for many dairy farmers, with some completely unaware of its effects, says Trina Parker, country manager for BEC Feed Solutions.