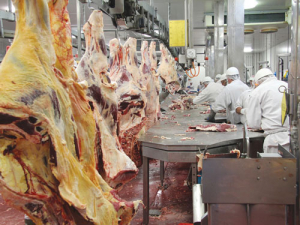 British vets say they are concerned about the rise in animals killed without stunning.

British vets says they are gravely concerned about the rise in animals killed without stunning.

The number of animals killed without pre-stunning has risen sharply, according to analysis by the British Veterinary Association (BVA) of the latest survey released by the Food Standards Agency (FSA).

Slaughter without stunning unnecessarily harms the welfare of animals at the time of death, yet 24% of sheep and goats slaughtered in April-June this year had their throats cut without first being made insensible to pain. That is up from 15% in 2013, when the EU and UK allowed an exemption for animals slaughtered for religious purposes.

The number of chickens being slaughtered without pre-stunning has soared from 3% in 2013 to 18.5% in 2017, the FSA figures also revealed.

“This huge increase in the number of sheep, goats and poultry not stunned or not stunned effectively before slaughter is a grave concern. Millions of animals are affected, making this a major animal welfare issue.

“The supply of meat from animals not stunned massively outstrips the demand from the communities for which it is intended and is entering the mainstream market unlabelled.

“In the light of these official figures we reiterate our call for all animals to be stunned before slaughter. If slaughter without stunning is still to be permitted, any meat from this source must be clearly labelled and the supply of non-stun products should be matched with demand.”

Welfare at slaughter is a pressing UK health and welfare concern for vets, according to BVA’s latest member survey.

Consumers must know how

The BVA believes all animals should be stunned before slaughter. But if slaughter without stunning is still to be permitted:

- where an immediate post-cut stun is applied, the requirement for sheep/goats to remain stationary for a minimum of 20 seconds is unnecessary as stunning renders the animal immediately unconscious and insensible to pain the supply of non-stun products should be matched with demand.