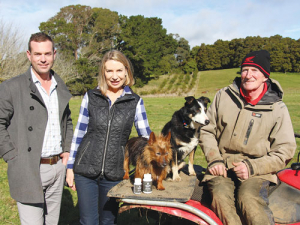 Farmers are buying a deer velvet supplement to give their working dogs zest and longevity, claims the maker, Gevir, of Havelock North.

The owner, farmer Josh Buckman, bought the business two years ago from Shelley and Clint Thomson, the 1991 founders.

Now he has launched a velvet pet product – a daily supplement for farm dogs, to improve their performance and longevity, he says.

“We knew the Gevir pet product would be an attractive option for pet dogs, especially older dogs, but we didn’t expect it to be so popular for working dogs.”

“Suddenly Thai came right and she no longer had a busted Achilles,” Thomas says. “She was back out on the farm with me mustering and easily jumping on and off the bike.”

Rittson and his wife Caroline also have a 12-year-old Aussie terrier, Fergie, that was starting to go bald.

“She was so bald her tail poked out like a finger. So I fed her deer velvet tablets every day and within a few months she had a thick coat again; she was also more spritely and back running around the farm.”

Ritsson-Thomas says he has been taking the Gevir deer velvet tablets for 10 years. “I find it helps me heal quickly and I don’t have the aches I had before.”

Wife Caroline used to have arthritis in her knee but after taking Gevir for 3 months the pain has stopped.

“If I stop taking the deer velvet tablets, I get aches and pains, so there is a noticeable difference.”

Gevir has been making the deer antler velvet supplement for nearly 30 years, exporting it to China and the US, and is now eyeing Canada, Japan and South Korea by the end of the year.