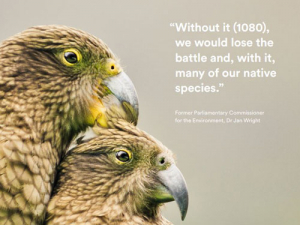 In its report the EPA says there were 50 1080 aerial operations in the year.

“It is a critical tool in the ongoing fight to protect our native birds from introduced predators – possums, rodents (rats and mice) and stoats,” she says.

“While around 30 research projects continue to look at 1080 alternatives and ways to improve the targeting of pests, the EPA believes the current rules around 1080 keep people and the environment safe.

The report includes information on 12 incidents of non-compliance with the rules, and three complaints reported to the EPA; all 12 incidents were investigated and none posed significant risk to public health or the environment.

“During 2016, there were 36 operations which covered a total of 1,051,201 hectares of land, due mainly to the Department of Conservation’s Battle for our Birds programme,” she says.