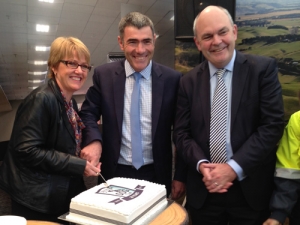 MPI celebrates 20 years since the birth of its biosecurity detector dog programme with a giant cake at the Christchurch A&P Show today.

MPI purchased the first beagles in 1995. Two of them started at Auckland airport soon after.

"They can pick up seeds and plants that can be hard to detect by x-ray. They also screen people faster than x-ray, and their visual presence sends a message to arriving passengers about how seriously New Zealand takes biosecurity."

He says 2015 is a big year for the MPI detector dog programme.

"We're gearing up with extra detector dog power for a busy summer – both in terms of passenger numbers and the heightened risk of fruit fly, due to outbreaks in Australia and other parts of the Pacific.

"We will have 24 new dog teams graduate from their training in December. This will be the largest number of dog teams to graduate at any one time in the history of MPI or its predecessors.

"The new detector dog capacity will allow us to screen all international flights arriving in New Zealand. So we've come a long way since our humble beginnings in Auckland 20 years ago."

Entries are open for the 2021 Primary Industries Good Employer Awards.