A wake-up call for biosecurity 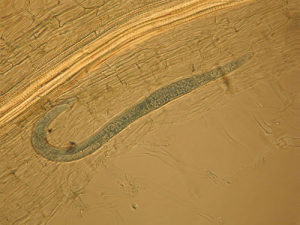 Research has found that nematodes in soil pose a potential biosecurity risk.

Tiny creatures in soil that attack plants have been seen to survive for at least three years stored in dry conditions in a recent AgResearch study.

This gives new insights into the biosecurity threats posed by passenger travel and trade between countries. The research article is published in the open access journal Neobiota.

The findings of the study also add to the discussions about how best to detect these creatures, called nematodes, before they cross borders and potentially reduce yields of important crops and pasture.

Nematodes are very small worm-like organisms. They can be extremely hardy and can have beneficial and detrimental impacts. The harmful ones, the plant parasitic nematodes (PPN), include species that attack plants, reducing their growth and survival.

In the study, soil collected from a native forest and an organic orchard was stored separately in cupboards at room temperature for 36 months.

Samples were then taken at regular intervals to see if any nematodes could be recovered from the soil and, if they could, whether they were able to infect plant hosts.

“In the study we used different methods to detect nematodes - including a water misting technique to draw them out of the soil, and a baiting method - where we grew white clover and ryegrass plants in pots containing a soil sample,” explain the authors.

“One of the PPN we looked at was the root lesion nematode. We found that lesion nematodes were able to successfully invade the roots of ryegrass even after 36 months,” says AgResearch nematologist Lee Aalders.

“They were also able to produce offspring at 13 months. Interestingly, no PPN were recovered from soil stored beyond the 13th month using the three-day misting technique.”

This means that given the right conditions, PPN in soil - carried on sea-freighted items, footwear or used machinery, and protected from sun or extreme heat - will survive if they end up near a suitable host plant. This is a result that may not be detected using an extraction test like misting.

For quarantine officials around the world, this result is an important find, as it reinforces the risk associated with soil that, even though it may look sterile, unwanted nematodes may be present and undetected until paired with a suitable host plant.

“In the context of biosecurity, we think the development of a generic test for plant parasitic nematodes - based on a molecular based bioassay - would enhance the probability of detection of PPNs and so prevent unwanted incursions beyond the border.”

Earlier this year, another AgResearch study into the survival rates of various transported soil organisms and in Neobiota concluded that biosecurity risks from soil organisms will increase with declining transport duration and increasing protection from environmental extremes.

Better Border Biosecurity (B3) is a multi-partner, cooperative science research into ways to reduce the entry and establishment of new plant pests and diseases in New Zealand.