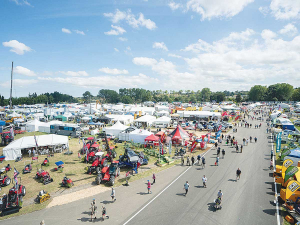 Some 600 exhibitors and more than 30,000 visitors are expected to attend this year’s Central Districts Field Days, being held at Manfeild from March 19-21.

Sales manager Cheryl Riddell says there will be about 600 exhibitors at the site – covering a wide range of goods and services for all those in the rural community. The event, which attracts close to 30,000 people from around the central North Island, features a range of events, cutting edge machinery and equipment and some of the latest developments in rural technology.

Riddell says the event is a great place for rural people to meet and network.

“You will find that someone is talking about getting a new tractor and they’ll talk to their neighbour and see if they have bought one and then compare notes,” she told Rural News. “On the day, they will get advice from their friends about a purchase – so there is lot of networking taking place.”

Riddell – who’s been involved in the event virtually since its inception – says it has come a long way and kept pace with the interests and needs of the rural community. She says in terms of visitors, the majority come from the lower half of the North Island.

“Definitely Whanganaui, Manawatu, Wairarapa and Taranaki, but we also finding more support now coming in from Upper Hutt and Kapiti.”

Riddell says the infrastructure at the Manfield site has improved with more tar sealed roads that make for better exhibitor sites. She says Manfield continues to improve its infrastructure, which is good news for everyone.

Riddell believes many locals like the idea of a local event because they can talk to people, they know.

“They don’t want to go to Mystery Creek and talk to someone from Invercargill who they will never see again,” she claims. “I think that’s where CD has been good for the people in this region because they can get to talk with those they deal with throughout the year.”

With an enforced absence of two years, brought about by its cancellation in 2020, the Central District Field Days at Feilding heralded the first event of its type for 2021.

Although the national economy is still functioning below pre-pandemic levels and the road ahead remains uncertain, the Manawatu region appears to be bearing up well.

The Central Districts field days is designed to showcase what the Manawatu region is all about – the backbone of the NZ economy.