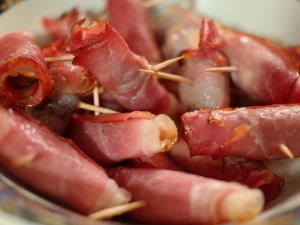 Entries are now open for the 100% New Zealand Bacon & Ham Competition and top butchers are encouraging their peers to enter.

“The winning butchers really value the increased exposure and business opportunities that come from being a winner in the competition,” says Ian Carter, chairman of NZPork.

“These guys are the best of the best when it comes to making New Zealand’s favourite cured meats.  So the competition is fierce to claim the top awards.”

This year will see the introduction of a new category - the 100% New Zealand Innovative Pork Product. Butchers will be given the chance to display their most inventive pork product, whether it’s skin on, skinless, boneless, bone out, cured or pickled. Entrants will be judged on the commercial viability of the product, whether the product is logical in its production, its appeal to the market place, practicality for cooking and serving and innovation.

Carter says he is excited about the new category and is looking forward to what the butchers come up with.

An independent panel of 33 judges - leading chefs, food connoisseurs and master butchers - will blind-taste each entry to select the best bacon and ham. Judging under international rules begins with a 100-point scale and focuses on attributes of aroma, texture, appearance, saltiness, sweetness and overall tastiness.

Last year’s Bacon of the Year winner Tom Coughlan of Independent Meat Processors says the win has made a huge difference to their business.

“We have had success in the past with multiple category wins, but taking out NZ’s Bacon of the Year validates the quality of the product we are putting out and we are incredibly proud of what we have been able to achieve.”

Rob Cameron from Cameron Harrison Butchery, who took home the supreme 100% NZ Ham of the Year 2014 for his sugar cured, bone-in ham also sees the benefits of the annual competition.

“We are proud to call ourselves a traditional butchery producing quality artisan style products, always striving to be the best to deliver outstanding meat for our customers. This award gives us that recognition and it has given the business a real boost.”

Butchers and retailers nationwide will put their craft to the test on Friday 10 July 2015.

Entries for the 100% NZ Bacon & Ham Competition close on 19 June 2015, winners will be announced at a joint award ceremony in September.