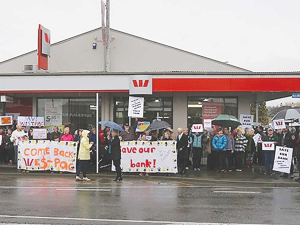 The news that Kiwibank was consulting with staff members and communities over the potential closure of seven branches, including branches in Balclutha, Gisborne, Matamata, Waihi and Waipukurau, was announced February 25.

“Reductions in services in rural communities is causing a deeper inequity of the provision of those services, compared with urban communities, adding pressures that are just not needed in this current social and economic climate,” says RWNZ national president Gill Naylor.

She says her organisation hopes that Kiwibank will use the agency model for other businesses to make sure banking services remain available in rural centres.

“There needs to be continued support for people to transact their daily lives in dignity.”

Naylor adds that an agency model would need to provide spaces for private, complex discussions.

“It is not acceptable for people to be discussing their personal banking requirements with staff, while standing in a line with others who just want to pay a bill,” she adds.

“RWNZ believes that rural communities need services close to where they live – this is particularly important for those where distance and lack of internet connectivity are more sharply felt.”

However, a Kiwibank spokesperson told Rural News that over-the-counter transactions in branches have declined.

“In some areas we now have half the number of customers visiting our branches as we did five years ago,” they said, adding that since Covid lockdowns came into play in 2020, visitor numbers in branches have not recovered.

“For every 1,000 transactions at Kiwibank, 977 are now digital, 15 are via ATM, five are in branch and three are through our contact centre.

“We are mindful this proposal may create uncertainty for some.”

The spokesperson says the bank has informed branch staff and are contacting community groups seeking feedback.

“We want to hear how our customers and community is using branches, what banking services they value, and what support they may need to be able to access banking services.”

Kiwibank say feedback can be submitted by email or mail by close of business Friday 12 March.

A final decision on the branch closures is expected in late March.