Breakthrough for the bees 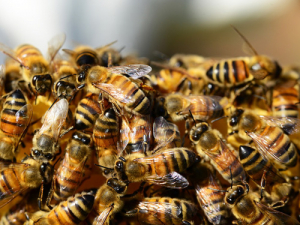 Our small but hardy honey bees are under siege from a range of pests and diseases.

Our small but hardy honey bees are under siege from a range of pests and diseases.

However, some relief may be in sight for these important insects from a particularly dangerous disease – one that can destroy entire hives.

Preliminary results from a pilot study undertaken by scientists at Plant & Food Research indicate that a breakthrough has been made in the fight against the pathogen Nosema ceranae.

This relative newcomer to New Zealand is a cousin of Nosema apis, which has been present in the country since the 1800s. Both N. apis and N. ceranae are spore-producing parasites that attack the gut lining of bees, leading to a shortened lifespan in adults. Severe cases of N.ceranae may cause the collapse of an entire colony.

Because Nosema is primarily spread through faeces on contaminated honeycomb, preventing infection is a near-impossible task, meaning the commercial costs associated with Nosema infection have simply been “a fact of life”.

During the springs of 2014 and 2015 many New Zealand beekeepers, particularly in the Coromandel, experienced severe and unexplained colony losses – a pattern that had not been seen before and which resulted in honey loss estimated at between 40-60% for the season.

N. ceranae had first been found in New Zealand in 2010 and was identified as a potential culprit for the calamity.

In response, a team from Plant & Food Research began working closely with Coromandel beekeeper Dr Oksana Borowik – first confirming high levels of N. ceranae in affected colonies, and then exploring ways to prevent the spread of the disease between hives.

Their early research findings are exciting: heat-treating the hive and internal comb to only 50⁰C for 90 minutes resulted in an increase in brood viability and a 50% increase in adult bee numbers.

The treatment is effective because heat kills N. ceranae spores lurking on contaminated comb before the new colony is introduced to the hive.

“Nosema ceranae has had a notable impact on hives and the honey industry in countries like the United States and China,” says Plant & Food Research scientist Dr Mark Goodwin.

“We need to take the threat of this disease very seriously, particularly as the honey industry and the pollination services of honey bees are very important to New Zealand’s economy.

“The initial findings of this research are a very encouraging first step in the fight against this threat.”

The team will build on this initial study with further investigations into the effect of seasonality and long-term treatment on bee populations.

If heat treatment is found to be a safe and consistent management option for beekeepers plagued by Nosema, there is the potential to greatly improve the health and productivity of New Zealand beehives.