Brothers to battle it out 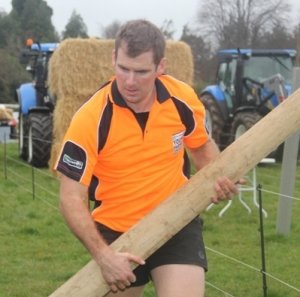 There will be a bit of sibling rivalry at the Mystery Creek Events Centre this Saturday.

Brothers Rory and Brett Steeghs are set to compete against each other during the Waikato/Bay of Plenty Regional Final for The National Bank Young Farmer Contest.

Brett, 23, is involved in research and development as a test engineer for an agricultural machinery company. This will be Brett's second Regional Final while his 25-year-old brother Rory will be competing for the first time. He is married to Kirsty and they have a baby on the way. Rory is a dairy farmer on a 300 cow farm in Cambridge and the brothers are both members of the Piarere Club.

The Steegh's brothers will also be competing against six other Regional Finalists and are up against some tough competition including fellow Piarere Club member Hugh Edward.

Hugh, also 23, is the vice-chair of the Waikato/Bay of Plenty Region; he is contract milking 220 cows and lists farm ownership as one of his long term goals.

Sam Williams competed in the Grand Final in 2010 and is a current member of the North King Country Club. Sam holds a Bachelor of Agricultural Science (Honours) from Lincoln University and is an Agribusiness Consultant based in Otorohanga. Sam is also involved part time on the farm he owns with his parents and is engaged to Brooke.

Dan Brice is sharemilking 210 cow with wife Michelle in Otorohanga. The 29 year old is the Chair of the North King Country Club and holds a Bachelor of Commerce (Agriculture) from Lincoln University.

Dwayne Cowin also belongs to the North King Country Club where he has been a member for two years. The 26-year-old has a partner Zara and is a Stock Manager on a 500ha sheep and beef farm in Te Kuiti. Dwayne holds a Bachelor of Applied Science (Agriculture and Rural Valuation).

Twenty year old Josh Macdonald is the current Chair of the North Waikato Club and this is his second year of entering the Contest. He's engaged to Aleshia and manages his family's 170 jersey cow dairy farm in Huntly.

Charles Price is the current Chair of the Eastern Bay Club and this is his second attempt at the Contest. The 24-year-old is in a sole charge position on a small scale dairy farm in Ruatoki.

All eight contestants will have their hopes set on winning so they have the chance to represent their Region at the Grand Final in Dunedin from May 24-26 (tickets are now on sale from www.youngfarmercontest.co.nz).

They'll also be competing for their share of over $20,000 worth of prizes thanks to the Contest Sponsors: The National Bank, Lincoln University, Ravensdown, AGMARDT, Silver Fern Farms, Honda, Swanndri and Echo.

To get their hands on those prizes they'll first have to complete four demanding challenges during the Practical Day from 8am at the Mystery Creek Events Centre. They'll then face the big questions during the Evening Show also being held at the Events Centre from 6.30pm (tickets are $50 and available from The National Bank).

New Zealand's future farmers will also be on display on Saturday; the TeenAg and AgriKidsNZ Competitions will be taking place alongside the Contest and the public is encouraged to come along and show their support