Capture the value of grass 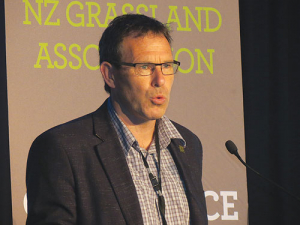 He says NZ needs to leverage its system more and capture the value at the high end of the market, and meet the criteria of sustainability in all its forms.

Stevens says getting good pastures is critical to making these gains in the marketplace.

While a lot of research effort has gone into studying pasture species and management, and soil chemistry, a lot of discoveries remain to be made, he says.

In particular, he points to the study of ‘microbiome’ – what happens to microbes in the soil; such research is expensive, ‘blue sky’ and long term, but fundamental to making the next step.

The key to breakthroughs in this research is government funding, says Stevens. “The research funding that comes out of the industries is absolutely fantastic in taking the fundamental discovery and tailoring that up to the business – no problem,” Stevens told conference-goers.

“But while we have a government that thinks about total research spend rather than its own research spend, we are not going to put enough money into making breakthroughs.”

He says it’s important that farmers, the agribusiness sector and scientists work together and build a sense of community to ensure research meets the future needs of NZ. He noted that the dairy industry has the right structure to support its levy-paying farmers.

“The discussion groups DairyNZ runs give them a direct link to their farmers and issues can be quickly brought to the attention of scientists – as they used to be in the old MAF days.”

Stevens says the membership of Grasslands (900) is still strong, but they want to continue to build the links and fill the void left by dismembering MAF. He says much more progress was made before this happened than with the patchwork approach governments now have to funding agricultural science.