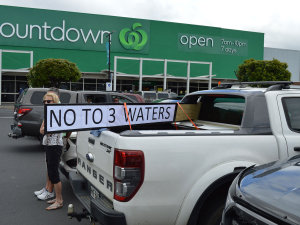 Groundswell New Zealand says it wants the Government to cease all regulations targeting the farming sector.

In a statement at the end of ‘The Mother of all Protests’ today, Groundswell NZ called on the Government to hold “genuine negotiations to reach acceptable solutions” with aggrieved farmers.

And it warns that if the Government doesn’t do this, the farmer lobby will invite all New Zealanders to join its next protest at Parliament in February.

However, it says the Government regulations around the environment, ute tax and Three Waters are unworkable, unfair and unreasonable.

“A Government must have enough wisdom and compassion to see this,” it says.

“The stress of Covid has been tough on us: these regulations only added to everyone’s worries.

“We demand an end to these regulations until genuine consultations takes place.”

The protest, held around the country, started with a drive through towns and cities by utes and cars and ended at 1.35pm

Groundswell has asked its members to disperse from protest sites peacefully.

Take the politics out of farm emissions

OPINION: Groundswell is not against climate policy, or a pricing mechanism to manage farm emissions.