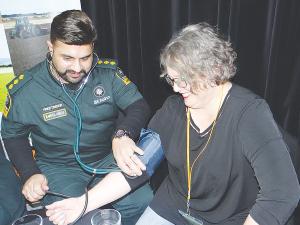 A new president, vice-president and chief executive are all now in place, following the conclusion of the organisation's annual conference, late last month.

She says some of the stresses rural contractors are enduring are largely due to the ongoing shortage of skilled staff, particularly experienced machinery operators.

"We all work hard in the season, but these shortages are pushing some contractors to breaking point."

"His advice was for rural contractors to focus on their businesses and really consider their capacity to service customers, review pricing and how to train and retain good workers," Olsen says.

This may include factoring in that pricing of farm machinery and wrap film that will rise next year by as much as 20%-plus in some cases.

Meanwhile, Slattery believes the key issue for rural contractors is the minimal allowance for 125 skilled machinery operators to come in for the next season, when a survey of rural contractors showed 400 or more were needed to keep up with farmer demand.

"We accept that as a quid pro quo, we have to continue lifting our efforts to train more Kiwis," she says.

However, Slattery points out that while these trainees emerge with tractor-driving skills, it takes a lot longer to get them to the point they can operate complex machinery.

Olsen says he will be pushing the Government for more experienced machinery operators to be allowed in from overseas.

"Or we face crops left in the ground, jobs and export dollars being lost as well as increasing health and safety risks and stresses for farmers, contractors and their staff."

He says he will also be asking for an exemption to the "unfair tax" contractors face when they need to replace their ute.

"Sure, we heard at conference of the recent launch of the electric Ford Lightning, which saw 44,500 pre-sales in two days in North America," he adds. "But it'll be years before we get them here."