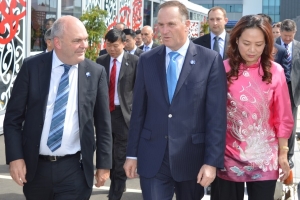 The $220 million Yashili plant at Pokeno, north Waikato, will make 52,000 tonnes of formula. The product will be sent to China in cans and in 25kg bags.

"With ever-increasing levels of urbanisation, and an increase in consumer demand for dairy products, China is the fastest growing dairy market in the world. The Mengniu-Yashili plant is creating an elite team based in New Zealand to embody a blending of cultures with an international vision and integrated ability," she says.

With food safety the utmost priority, the production plant was designed to operate under strict quality controls and testing will be conducted by AsureQuality.