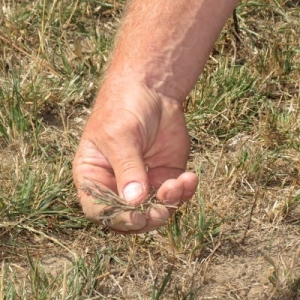 Patchy rain up the South Island’s east coast early this month eased the drought’s grip in a few areas but others still have zero pasture growth.

However, with the remains of cyclone Pam promising to cross the North Island early this week hopes of a real drought breaker were rising as Rural News went to press.

“It will all depend which way [Pam] goes and how far down it comes,” Federated Farmers North Otago president Richard Strowger said.

“It would certainly be a good start. Winter feed crops would respond and there’s still time for pasture to come back so it would make a big difference.”

Earlier rains had turned some areas green but there was still very little growth of dryland pasture as the moisture had only gone a few millimetres deep.

For many sheep and beef farmers flushing ewes on pasture wasn’t going to be an option, and there’s a reluctance to use grain because of the cost and uncertainty about lamb values next season, he said.

On the dairy side, Strowger hadn’t heard of any complete dry-offs but there was “a bit of 16-hour milking going on to try to get condition on cows. Everybody knows winter feed is going to be short so the aim is to dry-off cows as close to calving condition as possible.”

In general, dairy and sheep and beef farmers are coping with the stress of the situation but some sharemilkers are under extra pressure where farm owners are restricting supplement because it doesn’t pay at the low payout, he said.

“Winter and spring is when we’ll really see the stress come on people, particularly if it doesn’t rain and depending on what the payout does.”

Some areas had up to 15mm of rain March 6-8 but it wasn’t enough to get grass growing or make recently sown winter feed strike. “It needs to be followed up. It’s certainly not a drought breaker at this stage.”

Some farms had offloaded capital stock but most were managing and as most winter feed was autumn sown in the area a good rain soon would mean the summer’s drought wouldn’t have too severe an impact going forward, she added.

Most dairy farms in the region were doing ok thanks to alpine-origin irrigation.

In the south of South Canterbury it’s a similar situation because of irrigation from the Waitaki, but further north, where the Opuha ran out on Feb 25, even irrigated farms are feeling the pinch, said Murchison’s counterpart Ivon Hurst.

“They’re cutting down the numbers milking and going once-a-day, and they were reducing the stocking rates even before that [cut-off date].”

Winter feed crops will be up to 70% short of their potential and in a few cases have failed completely.

“But it’s not all doom and gloom. The grain farmers have had a reasonable harvest except for those who had to spring sow because it was so wet last autumn. They’ve been hammered.”

At the end of last week Farmax’s pasture growth forecasts, available through Beef + Lamb New Zealand or Dairy NZ, were predicting nil growth for Kaikoura district and only 1-2kgDM/ha/day in Hurunui, Central Canterbury and Waimate Districts. Timaru, Mackenzie and Ashburton Districts were slightly better but still well below the “typical” ranges for the time of year, while Marlborough and Waitaki, both very dry a month ago, had scraped back into typical growth for the time of year.