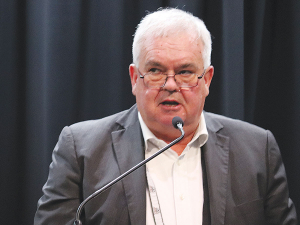 MIA chairman John Loughlin spoke of the new wave of collaboration in the sector.

Last month's Red Meat Sector Conference was very much orientated to looking to the future - especially in the new pandemic environment.

Labour shortages, supply chain disruptions and repositioning NZ to take advantage of the new environment were some of the topics canvassed. There was a special session for women and a panel of young people who gave their take on the future.

Celebrity farmer and Hawea Station owner Geoff Ross spoke of how excited he was for the future and put in a plug for regenerative agriculture. He also suggested the term 'red meat' should be replaced by 'nutrient rich meat'.

MIA chairman John Loughlin spoke of the new wave of collaboration in the sector - this was marked at the conference with the holding of a joint MIA and Beef+Lamb NZ board meeting to thrash out strategic issues for the future. Loughlin says the conference was good because the speakers challenged some of the delegates' thinking.

"We need to work out how best we articulate that message and take control of the narrative and define our own measured outcomes. We are looking at finding intelligent ways to find better outcomes rather than the unintelligent processes presently coming out of the bureaucracy."

Meanwhile, Beef+Lamb NZ chairman Andrew Morrison told delegates that farming is being challenged in a way that it hasn't since the economic resets of the 1980s. He says the sheep and beef sector has a history of innovation that has led to continuous productivity gains over the decades.

Morrison says in the recent Covid crisis the industry has again shown its agility and ability to adapt to changing circumstances. He added that the issue of sustainability is a global one - not a local one.

"A lot of people think this is the Government doing something but the Government is simply reflecting the messages coming back from the consumers," Morrison says.

"If you want to position your products in the market... people are going to be asking about your climate change, water and people, and we need to just get ahead of these issues."

Morrison says it's up to all those in the primary sector, including farmers, to be articulating these messages.