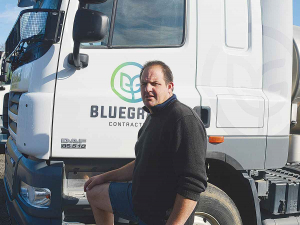 Agricultural contractors stand to lose millions of dollars and farmers could face a feed shortage unless the Government allows 380 machine operators from overseas into the country next month.

The cultivation and harvesting of feed, including grass, maize and grain, from the end of September remain in limbo due to Covid-19 border restrictions.

Parton told Rural News that contractors have told him that their losses could run into several millions of dollars unless their overseas workers are allowed in.

Farmers also face the possibility of a feed shortage. Parton says there could be a shortage of feed and grain for cattle.

“So we are not talking about individual losses for contractors, the whole agriculture sector could suffer at a time when the sector is seen as navigating the country out the Covid-19 pandemic.”

Parton says they are surveying members on the “absolute minimum” number of workers required this year. He says another submission will be made to the Government this week.

Last month the association met Government ministers, but Parton says they have been “going around in circles”.

“The problem is the decision to allow workers is a Cabinet decision and one chokepoint is the availability of space at isolation facilities.”

He says the Government allows movie makers into the country but is reluctant to do the same for the agriculture sector that is keeping the country going.

“I have nothing against hiring Kiwis, but we aren’t talking about driving cars here, this is expensive machinery requiring expertise,” he says.

He says good Kiwi machinery operators already have jobs and “we get the rats and mice of tractor/trailer drivers sent to us”.

“The job isn’t easy: you have to drive in winter for the day and half the night to make sure that customers get serviced.”

In the hope of attracting locals, Bluegrass Contracting is holding an open day to recruit about 10-15 people to work as tractor and truck drivers to serve the company’s farmer clients in the Waikato and Taupo.

The open day will be held at the company’s Te Poi site on August 15.

Waikato Federated Farmers vice president Ben Moore said there could be significant health and safety concerns if drivers are expected to work longer hours because of the shortage.

He supports Nettleton’s request for the Government to allow more experienced ag equipment operators from overseas into New Zealand until the country can train enough Kiwis for the work.