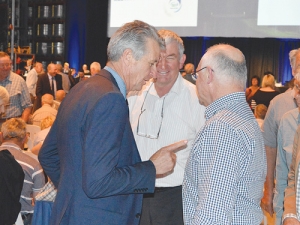 Fonterra farmers were angry with the directive from the Shareholders Council to vote against a remit, says Greg Gent.

He says the 53.8% 'yes' vote despite the council directive sends a strong message to councillors.

"As a representative body of shareholders they failed," Gent told Rural News.

"Farmers were angered by the council directing them how they should vote."

Council chairman Duncan Coull says it has a constitutional responsibility to review all shareholder proposals, make decisions on them, and "communicate our view of them and the reasons for these decisions to our shareholders".

"However, this process will never preclude our shareholders' right to vote in the manner which they deem appropriate," he says.

Coull says it will take the views of shareholders into on-going discussions with regard to the governance and representation review. "We're looking forward to this process and to a robust consultation process with our shareholders from which we will all have the opportunity to decide the best way forward for our co-op."

Gent says the vote is also a clear sign to Fonterra's board to act now on governance and review. "But I think it sent a stronger message to the Shareholders Council."

Gent and remit co-sponsor Colin Armer held seven farmer meetings around the country to promote their remit, calling for a nine-member board.

He says they did not have a full list of Fonterra suppliers and had to rely on advertisements and media articles.

"We advertised in the local paper; the press was quite generous to us. We also emailed some farmers with our views and were surprised at how viral it went."

Gent says during the farmer meetings the message was clear: farmers wanted a smaller board.

"Not one person said to us that a smaller board is not a good idea. That was clearly reflected in the vote."

Gent admitted the remit's downsizing suggestion was a weakness.

Fonterra chairman John Wilson acknowledged farmers want a smaller board. He told the annual meeting that was the message he got from taking part in farmer meetings around the country during the director election campaign.

Wilson was re-elected for another three-year term, along with Nicola Shadbolt.

However, Blue Read was ousted after serving three years on the board.