Creativity in dealing with drought 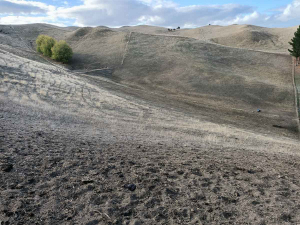 Farmers are getting creative to tackle drought.

Beef + Lamb New Zealand is taking some creative initiatives to help farmers deal with the drought gripping large parts of the country.

Promoting alternative stock feeds, staging webinars and arranging feed coordinators are just some of the initiatives.

BLNZ North Island regional manager Matt Ward told Rural News that farmers are not only concerned with the immediate problem of the drought, but how they will be in spring.

He says supplies of baleage are very limited and his team of extension officers have been working to get what feed is available to the farmers that need it most.

“Mark Harris, our lead extension manager from Hawkes Bay, has done some fantastic work in getting in a feed coordinator for the North and South Islands. We have put out a supplementary table of different feeds that sheep and beef farmers don’t normally use, but could – such as squash, apples and maize.”

He says other options include poplars. Farmers are now experimenting with ways of mixing these feeds without having to buy an expensive feed mixer.

Ward says they have set up an 0800 number where farmers can get additional advice from BLNZ staff and farm consultants.

He says BLNZ have also put up a massive amount of material on their website, along with tools that can help farmers deal with the drought.

“We ran a very successful webinar in association with DairyNZ and more than 200 registered for this, but we know that many others gathered around computers to watch it. We recorded this webinar and key parts have been put up on YouTube for people to see again. In general, the uptake in this area has been great,” he says.

Lochie MacGillivray says Hawke's Bay needs more rain in the next couple of weeks or there is a risk of the region slipping back into drought conditions.

Farmers will get final say

Andrew Morrison says farmers will ultimately have the final say on whether or not a controversial move to increase both Beef+Lamb NZ (BLNZ) and New Zealand Meat Board (NZMB) director fees goes ahead.