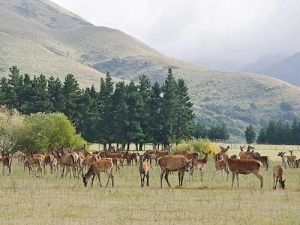 Deer farmers are looking at ways to retain young people in the industry.

A conference just for the younger generation is one way the deer industry hopes to retain young people in deer farming.

Deer is similar to sheep in that the average age of a deer farmers is about 55, says Kris Orange, New Zealand Deer Farmers Association executive committee chairman.

Initiatives like the Next Generation conference aim to inspire about 50 young people to “carry on and march up the tree a bit” within the industry, says Orange. There are about 2000 deer farmers in NZ.  If they can encourage those young people to carry on deer farming “percentage wise it is probably quite good,” he says.

The third annual Next Generation conference was held in Napier last month; the previous two were in Queenstown. Although mainly the sons and daughters of existing deer farmers attended the conference, a number of newcomers came from different backgrounds. Some may have been working for neighbours who had deer.

As deer farming is small within the primary sector, many younger deer farm workers don’t get the chance to network with others of similar situations, says Orange. Attendance is capped at 50 as this is better for drawing out discussion from all participants in workshops or the whole group together.

The main national deer conference is “a bit of a political beast,” Orange says. Some of the younger guys did not see themselves fitting into that side – they would rather get into the nuts and bolts, the facts and figures and meet people of that demographic.

The young people together spark good interaction and at the start they are told “no question is a dumb question”. “They all fitted in well and were all contributing well at the end of it.”

With about 50% having been to one or both previous conferences, he has had feedback that this year’s was the best. With velvet the focus, the first-day programme covered conception and reproductive performance, feeding for velvet production and business and financial performance.  Day two was a farm tour of Grant Charteris’ Tikokino property followed by analysis of velvet data.

“It was also to try to show what we can do with velvet at some reasonable (production) levels and give them some information on what the industry norm is in what we can produce per animal. It was good to go to a farm that was doing that…. If it had been a sheep farm, I would have called it [the land] a marginal sheep farm. But instead it is one of the high performing deer farms in the area.”

Orange says new opportunities are arising with velvet aside from traditional markets. Tonnes of velvet are now going into ‘healthy functional foods’ in the form of drinks taken on a regular basis that have velvet extract in them.

People in Taiwan and other Asians countries give their children a drink like that two or three times a week or maybe every day.  Whereas traditionally it would have been homemade and boiled up in a broth, now these drinks are premade. There are also opportunities for pet nutrition with the lesser grades of velvet.

Conference looks at winds of change

More than 130 of Australasia's leading agribusiness professionals are gathering in Wellington today for the annual Platinum Primary Producers (PPP) Conference.

Consolidation in the deer industry in the last five years means mainly the more committed farmers are left, which is good for the industry, says Kris Orange.

More than 300 delegates from throughout the country have been attending Horticulture New Zealand's annual conference being held in Rotorua.

Deer Industry NZ is fielding an upsurge in the number of farmers wanting to join an Advance Party (AP).