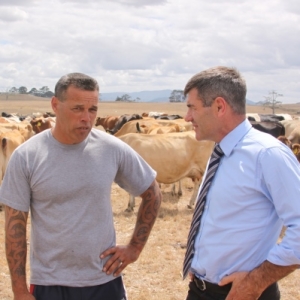 Minister for Primary Industries Nathan Guy says he is pleased with the way New Zealanders have rallied to help drought-affected communities, but challenging times still remain ahead.

"Scattered rain is forecast over the next week which will be welcomed, but on its own it won't be enough to break the drought conditions," he says. "We still need plenty more rain to help grass growth before the colder weather settles in.

"However it's encouraging to see a range of support available from not just the Government but also businesses and communities.

"Federated Farmers have run a series of 'farming in drought' field days and have been organising shipments of feed from the South Island to the North which have been gratefully received.

"Fonterra have announced they will be increasing their milksolids payout and earlier advance payments will be welcomed. This means early cashflow of around $100,000 for the average farmer, which will help with extra feed costs created by the drought.

"It's also pleasing that IRD have offered flexibility in the timing of tax payments, and many banks are offering special packages to help those affected by the drought.

"Many rural people can be reluctant to ask for help, but I would urge farmers to make use of the good advice and support available from their local Rural Support Trusts. These organisations now have increased funding from the Government to help their local communities.

"This is really important for those in regions like the West Coast who aren't used to dealing with such dry conditions. I will be visiting the Coast on Wednesday to see how they are coping.

"I would also urge lifestyle block owners to seek advice or attend field days if they are not used to dealing with these conditions," says Guy.