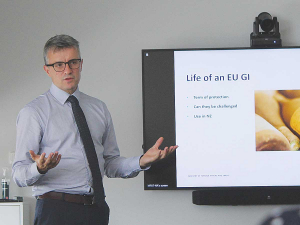 A lead negotiator says agricultural access and geographical indications are high on the agenda as New Zealand enters the ‘tricky’ part of negotiations with the European Union (EU) on a free trade agreement.

“We are starting to encounter what we always knew you would be hard issues for the EU around agriculture and access,” says Ali Hamilton, deputy lead negotiator for the EU-New Zealand Free Trade Agreement (FTA).

“New Zealand is looking for a level playing field to ensure New Zealand products can be traded into the EU. We are working to find a way through on that. Connected to agriculture market access is the issue of Geographical Indications (GI),” she told a Ministry for Foreign Affairs and Trade (MFAT) briefing in Auckland last week.

“GIs are something that the EU really wants. We are pretty upfront to say we know there were we something on GIs in this deal but we don’t yet know what it will be.

“That is why we need to have these conversations and any outcome on GIs will need to be balanced against an outcome that takes into account New Zealand’s interest as well.

The briefing heard that GIs for wines and spirits are already protected under New Zealand law, but the EU wants similar GI regulations for food products.

Hamilton says they have now had six rounds of free trade negotiation. The last round was held in December 2019 and they will go into round seven at the end of March.

“In the trade negotiation world six rounds since we launched in June 2018 to December 2019 is quite fast. A number of free trade agreement (FTA) negotiations we have had in the past have taken a lot longer to get up to round six so we are pleased with the progress.

“That means they are now starting to get into some of the tricky issues.  That is where the GI conversation comes to the fore.”

She says the EU FTA is a “really significant opportunity”

“We are talking about the world’s largest trader and New Zealand’s third-largest trading partner.

“Our exporters face a disadvantage compared to their competitors it do have deals.

“So if you are a horticultural exporter from New Zealand and you are selling into the EU your competitor from Chile may have better terms than you do because the Chileans have got an FTA.

“We are looking to level it playing field and get the balance right. Even when we take the UK out we’re still talking about $18 billion dollars of two-way trade.

With the UK in it was $22 billion dollars so it is a significant proposition.”