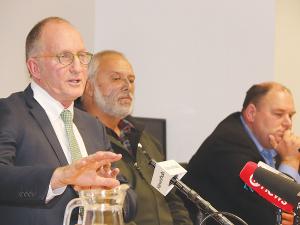 All the agricultural sector groups pointed to their willingness to work with the Government.

But before the ‘love in’ at Parliament had ended, cracks – albeit small – were appearing.

For its part, the Government appears to be backing a proposal by the Interim Climate Change Commission (ICCC) to immediately introduce a levy on farmers to help fund research into climate change. This levy would be skimmed off at processor level, ie by the meat and dairy companies.

All agreed that farmers need to change and be incentivised to do so, but there the two groups part company.

To emphasise this point the agricultural coalition unveiled its paper ‘He Waka Eka Noa – Our Future in Our Hands’ which offers an alternative that would see industry-good organisations (eg DairyNZ, etc) leading the change without the need for a levy.

While the agri sector supports the change, the members argue that a levy taken off at the processor level would not incentivise farmers to change.

Andrew Hoggard of Federated Farmers says the levy approach could in fact encourage the wrong sort of behaviour.

“For example, the levy might incentivise farmers to go out and buy more PKE to produce more milk to pay the levy or tax.”

Hoggard instead suggests building farmers’ knowledge about farm emissions and drawing their attention to new technologies to help them reduce these. The agri industry’s proposal for industry-good groups to work with farmers would be more likely to result in emission cuts.

Hoggard reminded his audience that farmers are not doing nothing.  They are not unwilling to change, they just a lack the tools for the job, he said.

“Unlike an [alternative] fossil fuel powered vehicle, there is no ‘electric sheep’ equivalent for farmers. But there is the potential for methane inhibitors or a vaccine, albeit some years away from proof and coming to market,” he said.

Beef + Lamb NZ chair Andrew Morrison agreed, saying the main thing is to incentivise farmers’ behaviour and get there quicker.

“We believe that an [obligation for a] processor point of levy won’t drive or recognise the right behaviours,” he said. “We see our proposal as another option.

“This whole coming together is unprecedented. Now our concerns are to drive behaviour change on farm and in river catchments. We want to reward farmers and drive the behaviours as quickly as we can.”

Tim Ritchie, chief executive of the Meat Industry Association, says processors and marketers recognise the benefits of finding a solution to agricultural gas emissions. But he says the levy concept as proposed by the ICCC is just another tax and a very simplistic solution.

“The minister says it’s to give the right signals to the right people and the farmers and growers are the people who make the change,” Ritchie explained.

“In our view, the best way to get them to change is to give them the responsibility for setting up the process and therefore holding them accountable for actually achieving it.”

The Government proposal is still not set in concrete as both the ICCC report and the alternative agricultural coalition report are now out for consultation with a decision expected in a month or two.

But regardless of their differences, there is little risk of serious damage to an apparently genuine desire to work together.