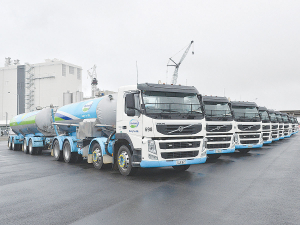 Most independent processors want the Government to shelve its plan to amend the Dairy Industry Restructuring Act.

Most independent processors want the Government to shelve its plan to amend the Dairy Industry Restructuring Act (DIRA), which will accommodate capital structure changes voted for by Fonterra shareholders late last year.

Submissions made to the Ministry for Primary Industries (MPI) on Cabinet's plan to approve the DIRA changes were made public last month.

He refers to an analysis of the restructure and proposed DIRA changes from Castalia, a global economics and regulatory advisory firm hired by Open Country for the exercise.

Koekemoer claims it highlights the major risks for competition and productivity from granting Fonterra even greater ability to manipulate the milk price.

"We urge the Government to reject the capital restructure and not to proceed with these DIRA amendments.

"The Government committed in April 2022 to review DIRA more fundamentally, in response to the Productivity Commission's concerns about 2020 changes to DIRA.

"Not even one month later it is now considering even greater relief and favouritism for Fonterra."

But Koekemoer concedes that the restructure is likely to proceed as hinted by the Government.

In a joint submissions three smaller processors - Synlait, Miraka and Westland Milk - claim the Government has taken an "anti-investment and anti-competition position" by proceeding with the DIRA amendments.

"Government proposals have not fully taken into account the impact this will have on competition in the raw milk market and dairy processing in New Zealand," they say.

A key aspect of the original pro-competition provisions of the DIRA was to assure the unimpeded "free exit" of Fonterra members should they choose to supply milk to other parties.

However, the three processors claims this included provisions that ensured Fonterra could not discourage members from leaving by preventing them from accessing the full value of their investment on departure.

"In the original DIRA, Fonterra was required to redeem shares of existing members on the basi of a (presumably independently) assessed fair market value."

They claim Fonterra is now seeking further changes to DIRA to facilitate another change in its capital structure.

"Fonterra members will no longer to be able to exit Fonterra and receive fair market value for their shares."