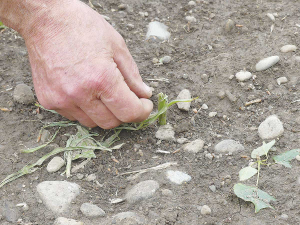 Dromore farmer Brian Leadley is unsure how much of his young sweet corn will survive the battering of the mid-November hailstorms. Photo: Rural News Group.

Hailstones the size of golf balls were reported in a big storm which hit on November 20, on top of a smaller but still damaging storm two days earlier.

Federated Farmers arable vice chairman Brian Leadley, who farms at Dromore, near Ashburton, in the middle of the affected area, has himself suffered significant damage to milling wheat, sweetcorn and process peas.

But there is no similar scheme for other crops and Leadley believes private insurance is not common, except possibly for some high-value crops such as hybrid vegetable seed or for growers in known hail corridors.

During both the Monday and Wednesday storms, United Wheatgrowers have received about 50 claims for damaged wheat crops from St Andrews and Clandeboye in the south right through to Darfield and Leeston in the north.

The claims had yet to be assessed. Leadley said he could not quantify the dollar cost, but the amount would be significant as the farms involved were about 130 to 600ha each.

“Fair to say it will be pretty large for the total industry, given that we’ve seen 50-odd claims on wheat alone and you’ve got all your wheat and your barleys,” he told Rural News.

“And you’ve got all your early vegetable seed crops and vegetable crops as well.”

He said peas had been knocked around badly, particularly if they were flowering.

Leadley is advising farmers to work closely with their agronomists to minimise losses and protect the surviving crop as well as possible and to act quickly.

Common options could include applying fertiliser to give the plants a boost and fungicide to protect against disease.

He expected advisers and assessors to be busy right across the affected district, and supplies of fertiliser and fungicides to come under “a wee bit of pressure”.

On his own farm, Leadley’s sweetcorn was at an early seedling stage with many plants flattened.

His wheat, planted in April and due for harvest late January, was still standing but looking tatty with ears broken and bent and grains knocked off. The yield is likely to be down about 10-15%. Leaves have also been split, providing an entry point for fungal disease.

Leadly’s peas were at the flowering stage and suffered a lot of bruised leaf and flowers totally chopped off.

“They’re a process pea so we have to work very closely with our agronomists just to make sure that what we’re doing is well within withholding periods, because they were due for harvest in about four weeks,” he told Rural News.

Speaking again a few days after the storm, Leadley said some of his sweetcorn plants were “certainly” lost but many recovering quite well – although some of those will have lost the central stem, in which case no cobs will form.

Leadley said his peas also looked a lot healthier after some warm weather and a spray of liquid fertiliser and fungicide.

“Just a wee bit to try and give the plants a bit of a pick-up. It’s trying to help the plant but it might help me as well,” he said. “But the flowers that are gone are gone.”

However, he had heard of one or two pea crops where the farmers have given up on harvesting peas and will instead cut it for silage.

“That’s the only crops I’ve heard that of. Largely it’ll be yield loss rather than total loss.”

Through the Foundation for Arable Research website, United Wheatgrowers is advising farmers that it is better to submit an insurance claim for eligible crops now, and withdraw it later if crops grow out of damage, than to submit late claims which are more difficult to assess.