Hard work pays off for Share Farmers of the Year 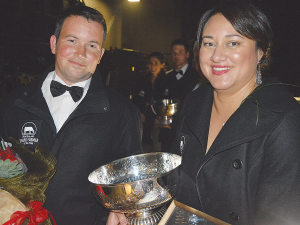 2019 Share Farmers of the Year Colin and Isabella Beazley.

Newly crowned 2019 Share Farmers of the Year Colin and Isabella Beazley plan to use their win to enhance their dairying careers.

The 50/50 Northland sharemilkers say winning the prestigious title means so much to them.

Colin Beazley told the 600 farmers and industry leaders at the awards night in Wellington that they have worked very hard this year to get here.

“This win will open doors for us and we’ll happily look at each one of them,” he says. “We will use this win to move forward with our careers and take our business forward.”

The Beazleys, both aged 31, are 50/50 Sharemilkers for Neil Jones and Wendy Crow-Jones, milking 330 cows on the 163ha Wellsford property.

The couple have entered the awards twice previously and were third place getters last year in the same category. They took home $52,000 in prizes.

“They are a great team and complement each other in their roles onfarm.”

A poignant moment of the awards was the presentation ceremony for the 2019 Fonterra Responsible Dairying Award winners, Damian and Jane Roper, Taranaki.

They received the John Wilson Memorial Trophy from Belinda Wilson, wife of the former Fonterra chairman who passed away earlier this year. Mrs Wilson was accompanied on stage by Fonterra chief executive Miles Hurrell.

Hurrell said Wilson, as a successful farmer, was keenly aware of the need for, and benefits of, farming in a sustainable and responsible way.

“John was a hugely respected leader of our co-op and the wider industry and the driving force behind this award. Its establishment was his idea so it’s only fitting that the trophy be named in his honour and memory.”

The prestigious award recognises dairy farmers who demonstrate leadership in their approach to sustainability and who are respected by their fellow farmers and their community for their attitude and role in sustainable dairying.

Judge Gavin Roden, NZDIA trustee, said the Ropers are passionate, enthusiastic and energetic with an ability to motivate people around them. “They are determined to be better than just compliant,” he said.

From restoring bush on their property to its former natural state to creating a lake and monitoring the water quality, the Ropers impressed the judges with their commitment and passion.

The 2019 awards also marked the retirement of NZDIA general manager Chris Keeping after 18 years in the role.

2019 Share Farmers of the Year Colin and Isabella Beazley, of Northland, say the benefits to their career and business from entering are worth the effort and time.