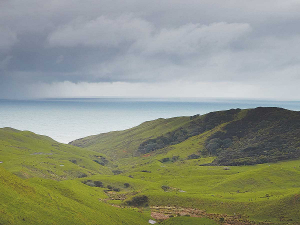 Jackson has taken his farming experience from his coastal sheep and beef property at Te Akau in the development of an agribusiness programme that has now been rolled out in secondary schools throughout NZ.

John Jackson’s ability for future and critical thinking saw him deeply involved in the development of an agribusiness programme that has now been rolled out in secondary schools throughout NZ.

The North Waikato sheep and beef farmer has had an interesting and eclectic journey on the way to his eventual farming career and farm ownership. Read more here...

With a long history of community service, Jackson was invited to join the Waikato Anglican Trust Board in 2012 that governs the running of St Paul’s Collegiate in Hamilton, where his children went to school.

“John Oliver – a notable King Country farmer and philanthropist – encouraged the school to consider teaching agriculture and develop a curriculum accordingly,” he explains.

“Once the board was convinced that this had merit and as the only farmer on the board – and with an interest in agriculture – it fell to me to start the process.”

He says along with St Paul’s headmaster Grant Lander, he quickly realised that agriculture as a subject in secondary schools was poorly thought of but had much potential and demand in the workplace.

Lander says as deputy chair of the St Paul’s Board of Trustees (Waikato Anglican College Trust Board) Jackson was an extremely passionate advocate of the rural sector.

“John played a very crucial role in the implementation of Agribusiness as a subject at NCEA Levels 2 and 3 into the national school curriculum. Highly respected and well connected, John helped gather and secure the support of business and principal partners for the initiative.

“Without John’s key input, it is doubtful that we would have gotten this ambitious project through to fruition.  Today, over 120 schools and 2200 students are currently learning about some form of agribusiness. I firmly believe St Paul’s Collegiate School and New Zealand schools owe a huge debt of gratitude to John,” Landers told Rural News.

“Throughout this process, I quickly learnt that John is an impressive guy to work with.  People were quickly won over by his genuineness and down-to-earth manner.”

Jackson puts the programme’s success down to a team effort.

“I was incredibly fortunate to work with a large number of motivated people. I will be eternally grateful to Tony Egan (Greenlea Meats) for his advice and belief in what we were trying to achieve – and his early financial support,” he adds.

“Tony’s early action was the encouragement others needed. While headmaster Grant Lander and the St Paul’s staff put in an incredible amount of work over a five year period to get it established and the relative NCEA accreditation.”

There appears to be no shortage of school leavers wanting a career in the sheep beef and deer industry, but rather a lack of training farms.