Hort NZ an example for Australia 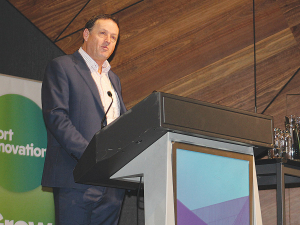 The organisation was held up as an industry advocacy model that could be copied by Australia’s multi-billion horticultural sector.

“They do it once and they do it well. Regardless of the method we adopt that is an outcome we must achieve,” Whiteside told the HortConnections conference in Melbourne.

In Australia, he says, the industry players trip over each other.

“There is too much duplicated effort and waste. We waste too much time and money and it is not acceptable. The results are actually suboptimal.

“For the industry to actually achieve its potential and grab the opportunities the future holds this is one area where we need to lift our game and always have front of mind the best interests of growers.”

The HortConnections conference was jointly hosted by AusVeg and Produce Marketing Association ANZ.

Biosecurity in Australia needs to be seen from a nationwide perspective rather than its state model which places the country at a huge disadvantage internationally, Whiteside says.

Growers themselves are the most valuable resource as they are at the front lines of disease and pest detection.

“However those who have done the right thing and duly reported outbreaks have been significantly damaged both socially and financially,” he told the conference.

“This is precisely the opposite of what should happen. The cost of fully compensating growers who do the right thing will always pale into insignificance alongside the cost to the industry of a poorly managed incursion.

“This anomaly needs to be fixed and we need to develop a mechanism that rewards and encourages reporting.”

But the industry has a “soft underbelly” undermining its reputation – workers living in squalid conditions on poor pay. This needs weeding out, he said.

This would allow the industry to promote its positive side “and help understand the consumer concerns about our industry and work together to solve them”.