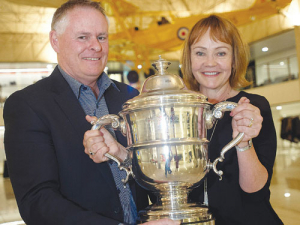 Very similar to the famous rugby Bledisloe Cup, horticulture’s version was one of three cups which then Governor-General Lord Bledisloe presented to New Zealand in 1931.

The award recognises McBride’s 40 years in the kiwifruit industry.

“The Bledisloe Cup celebrates a person who has made an outstanding and meritorious contribution to the NZ horticulture industry, and Peter McBride certainly epitomises that,” said Horticulture NZ president Julian Raine.

“In 1978, Peter was first exposed to the NZ kiwifruit industry through his family’s orchard in Te Puke, Bay of Plenty.

“He went on to purchase his first kiwifruit orchard in 1989, and today he has responsibility for several large farming companies and heads one of NZ’s key horticulture companies, as the chairman of the Zespri board.

“He has fought hard for horticulture and is a key interface between growers, industry and the Government. He is focused on innovation and also represents Zespri International as a director on the NZ International Business Forum, and as a member of the NZ-China Council.”

Also presented on the night was Horticulture NZ’s inaugural Environmental Award, which went to another Bay of Plenty kiwifruit pioneer, James Trevelyan, managing director of the family business Trevelyan’s Pack and Cool.

“On considering the nominees for this award, the Horticulture NZ board was heartened by the vast amount of environmental work underway and the focus growers have on sustainability,” said Raine.

“James Trevelyan proudly and publicly supports the environment while providing tasty, healthy, nutritious fruit to the world. In 2017, his family-owned company produced a report, Our Journey Toward a Sustainable Future, that states sustainability is a journey that requires ongoing development, innovation, collaboration and commitment.”

Trevelyan’s was set up by James Trevelyan’s parents 52 years ago, and now employs 170 permanent staff, rising to 1650 in the season.

In an earlier presentation to the conference, he outlined how the company joined a “sustainability journey” four years ago on the three pillars of working smarter, respect for people and treading lightly on the environment.

Trevelyan said examples are the waste organic matter coming onto the site which is now sent back to orchards in the form of 200 tonnes a year of compost, and waste label backing paper now being processed into animal bedding.

The Bledisloe Cup for 2019 has been won by Gisborne horticulture leader, Bill Thorpe.

As we bid farewell to another year it’s time for the annual review of 2018 in the primary sector as seen by the Rural News editorial team.

Has Fonterra's new director Peter McBride just strengthened his case to become the co-op’s next chairman?